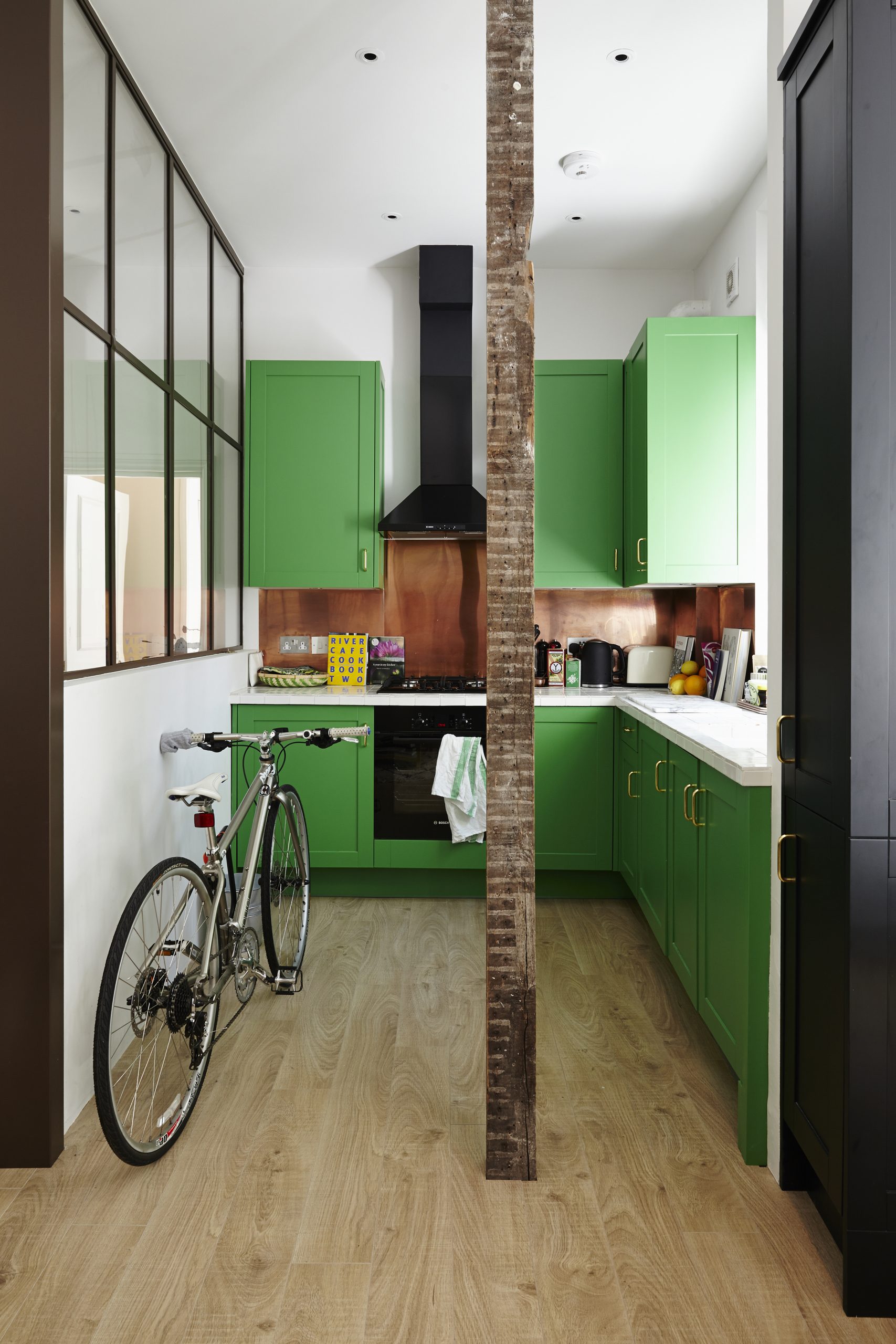 Anna and I met earlier this year, on a photo shoot I was part of for the gorgeous pyjama brand Yolke (whom Anna is the Co-Founder and Director). I was photographed in her West London flat as my house was, well, a bit bare to say the least. When inside the flat, I was blown away by the style. The use of colour and space and the quirky details and knew I wanted to feature it here straight away. Thankfully Anna agreed, so here it is… 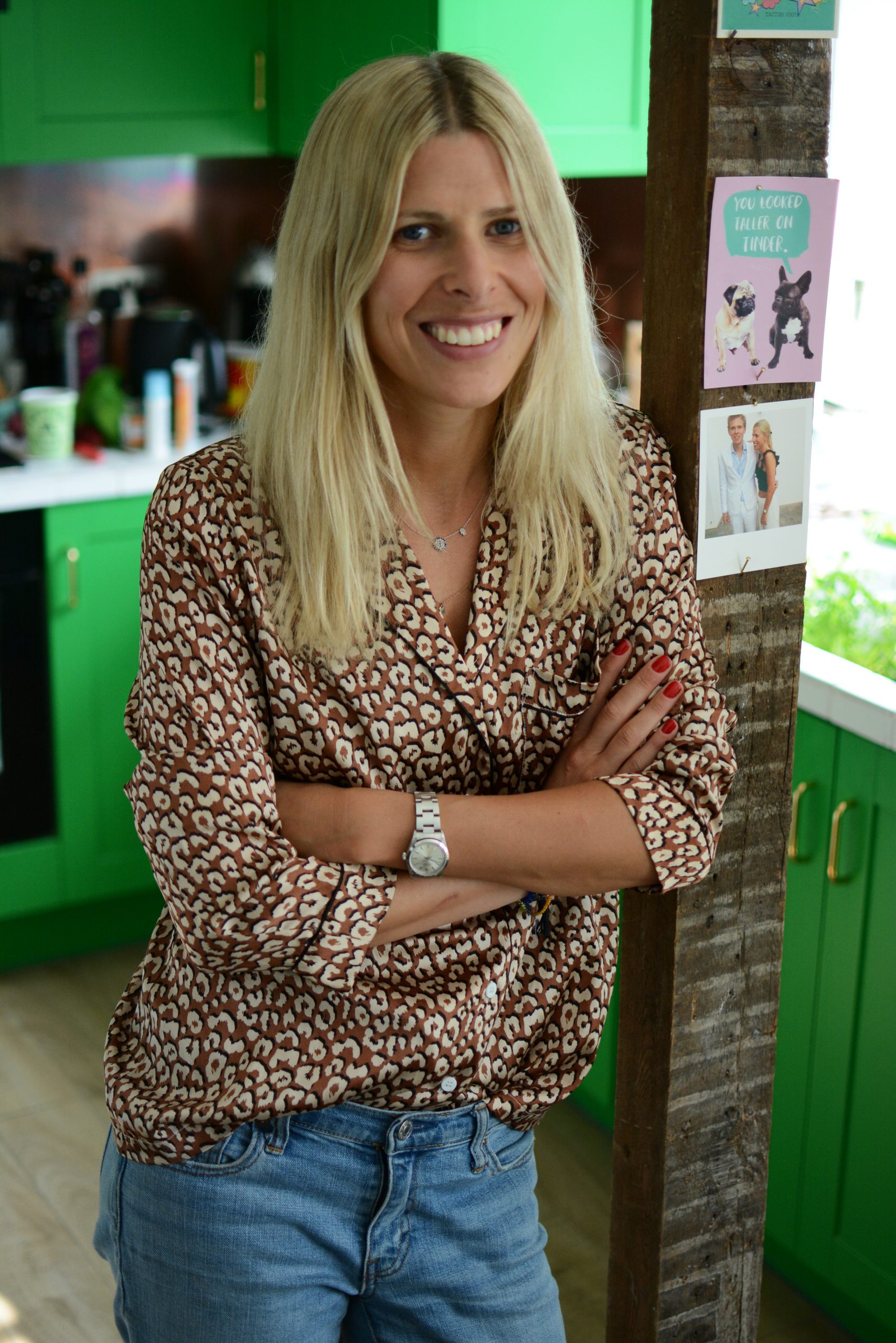 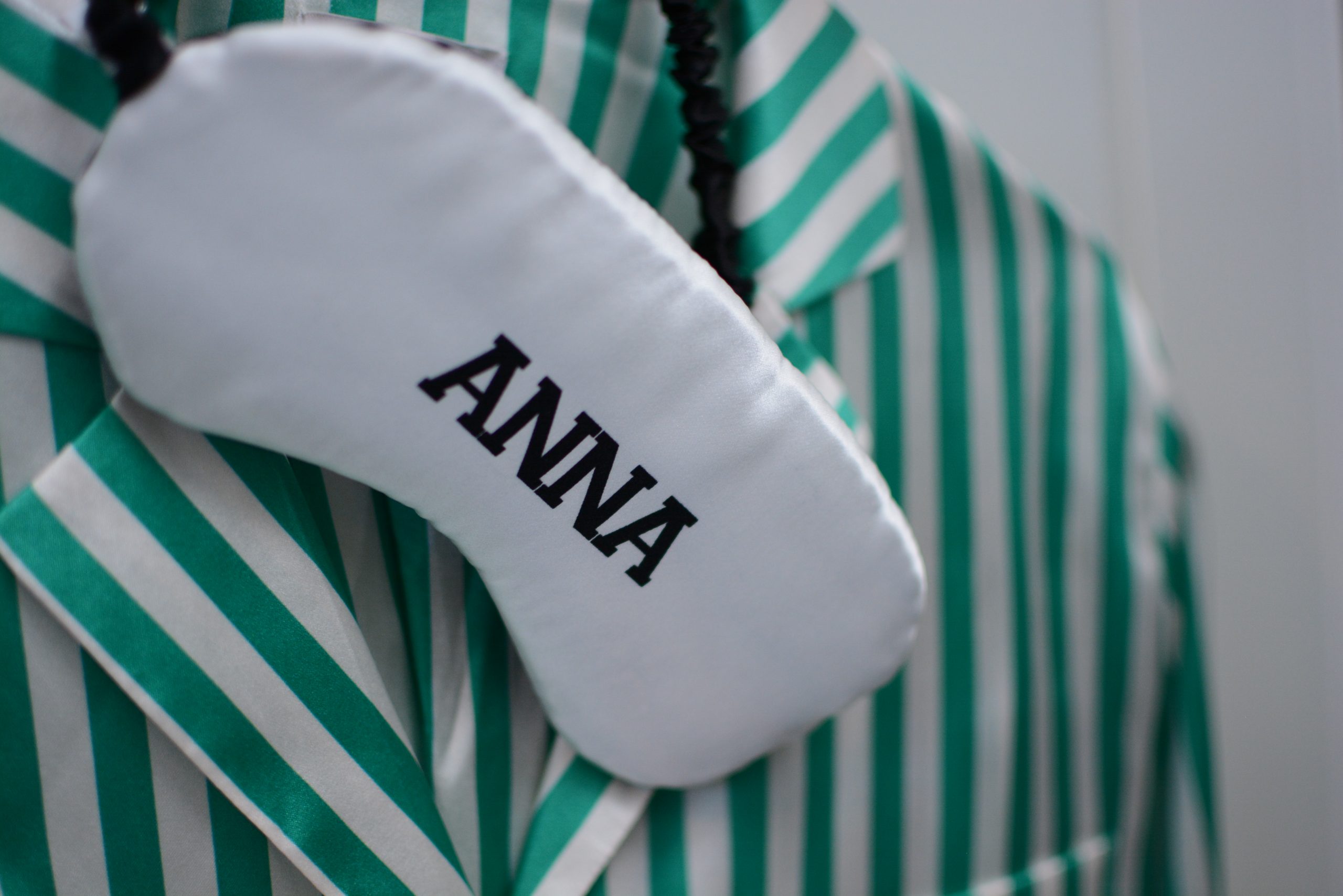 How long have you lived in your West London Flat?

I’ve lived in London for about 12 years and have remained within the same square mile in West London, around Ladbroke Grove and Notting Hill. Recent additions include my one year old whippet – Chilli. 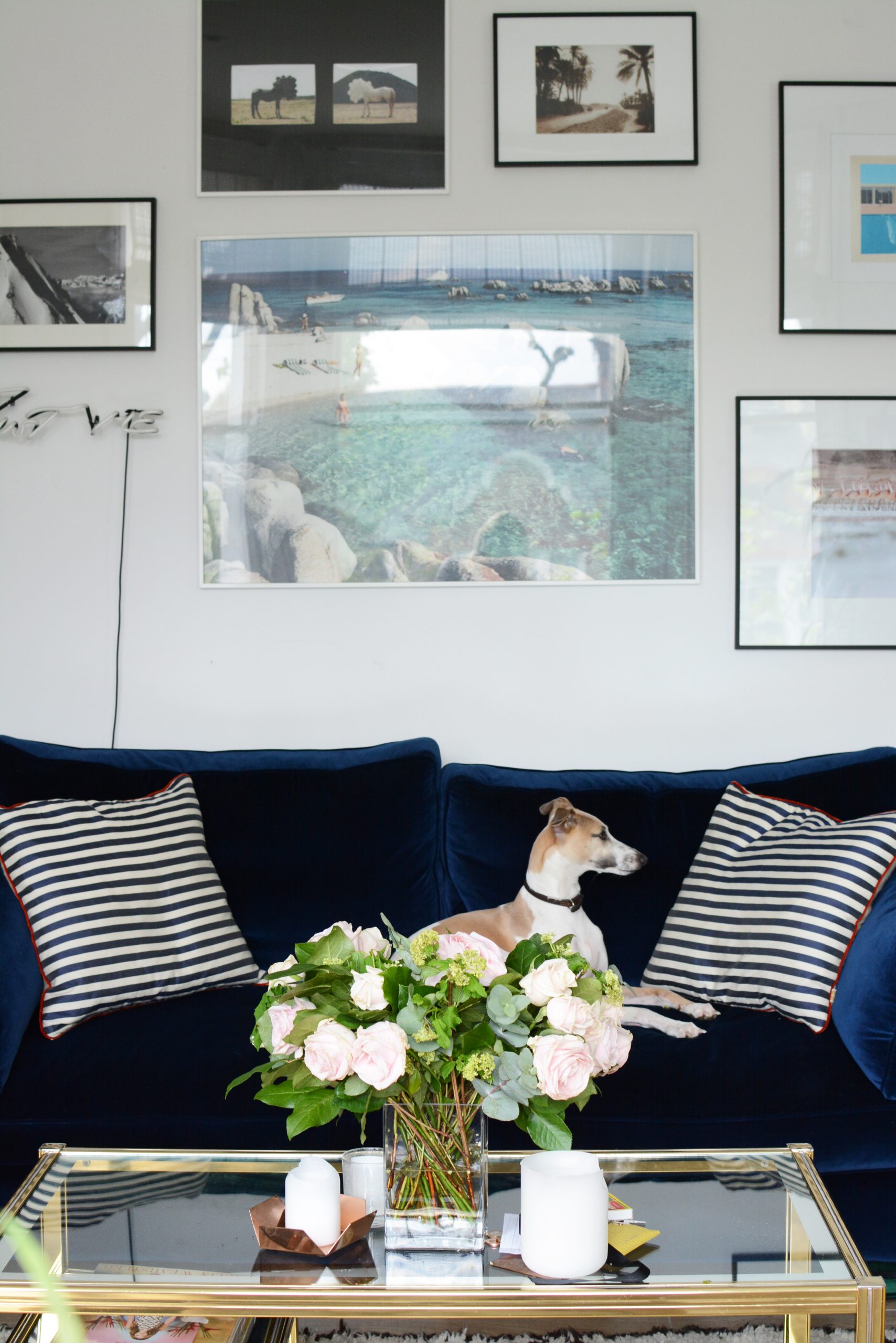 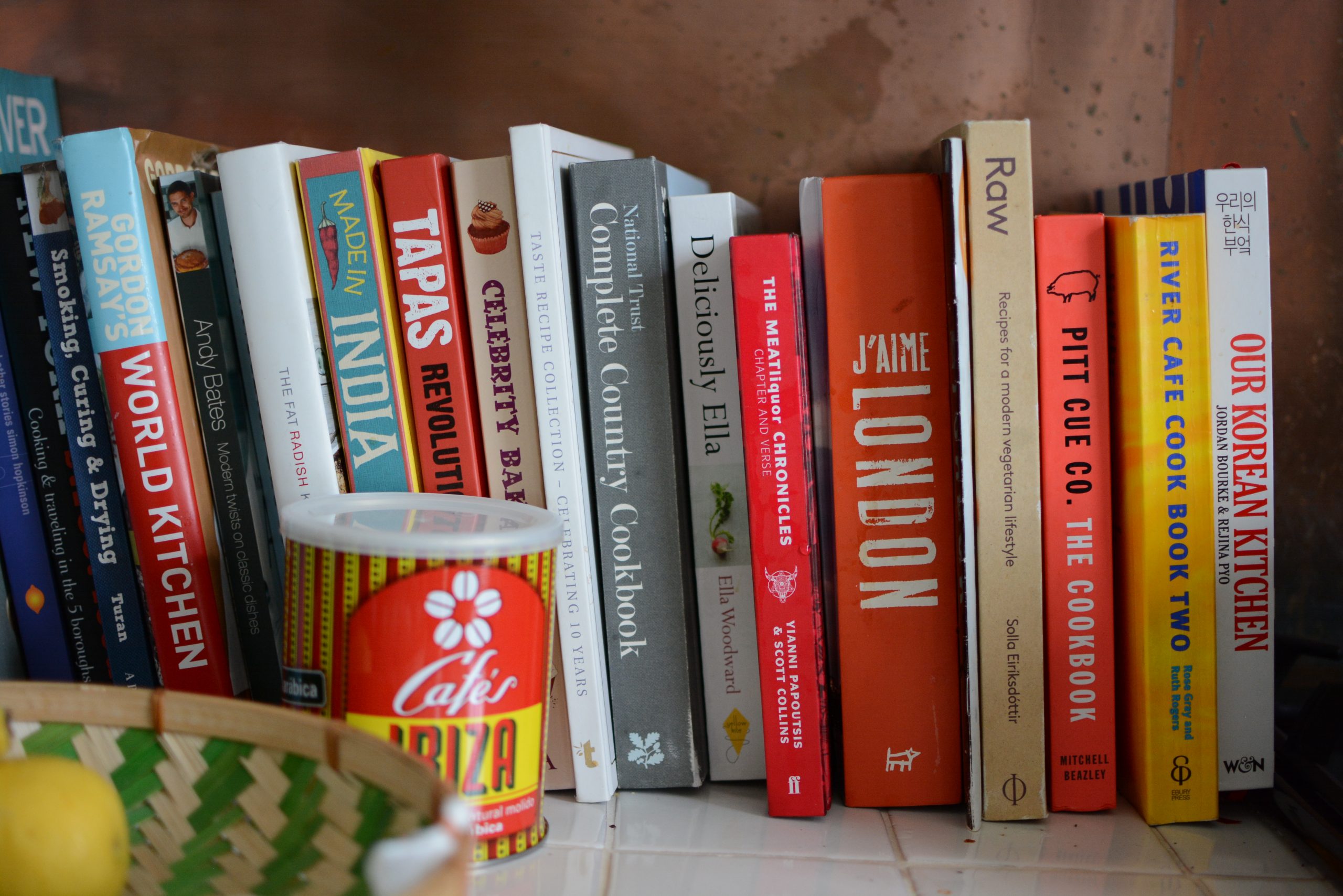 What do you love most about living here?

My West London flat is in a little neighbourhood off Ladbroke Grove that has pretty tree lined streets and three parks within a few minutes which is amazing for dog walking. It feels very villagey but is also super close to the hustle and bustle of Golborne Road which is one of my favourite streets. Nothing beats a weekend morning strolling the market for antiques and a big breakfast at the Deli. Our studio is just around the corner as well and there are so many other creative businesses here. The area has always been known for its good vibes. I also love being close to my family, who all live close too. And being able to escape to the West country easily which is where I’m originally from! 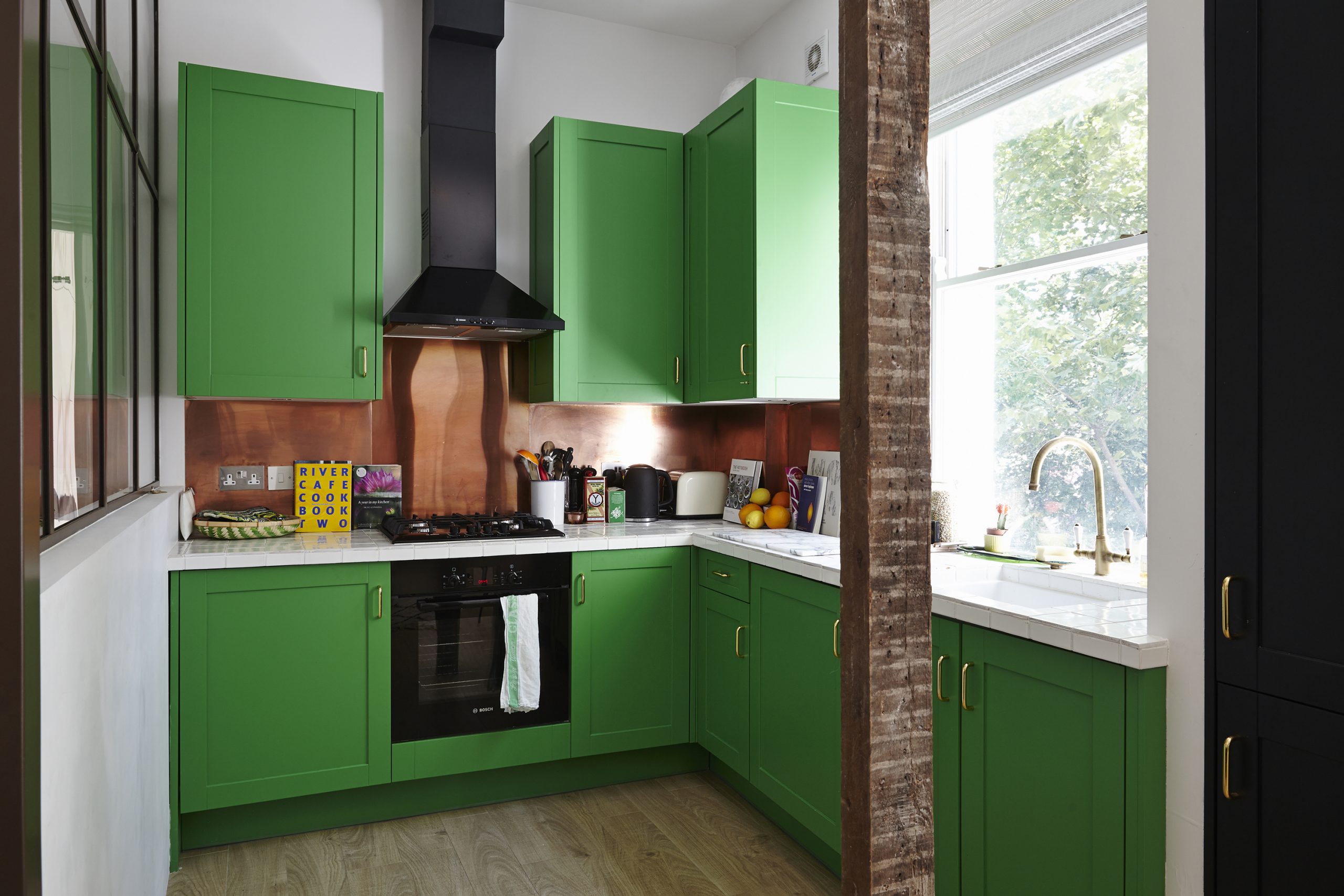 You have a really bold kitchen, which I love – have you ever doubted your ideas?

No, that was actually the absolute first decision I made!  I love colour in interiors and, due to the nature of the layout of my flat, it didn’t work to paint too many walls. I really wanted a bright kitchen as it’s the heart of the home and the colour is so uplifting. We don’t live in the brightest country a lot of the year so my Mexican green cupboards are a daily dose of sunshine! 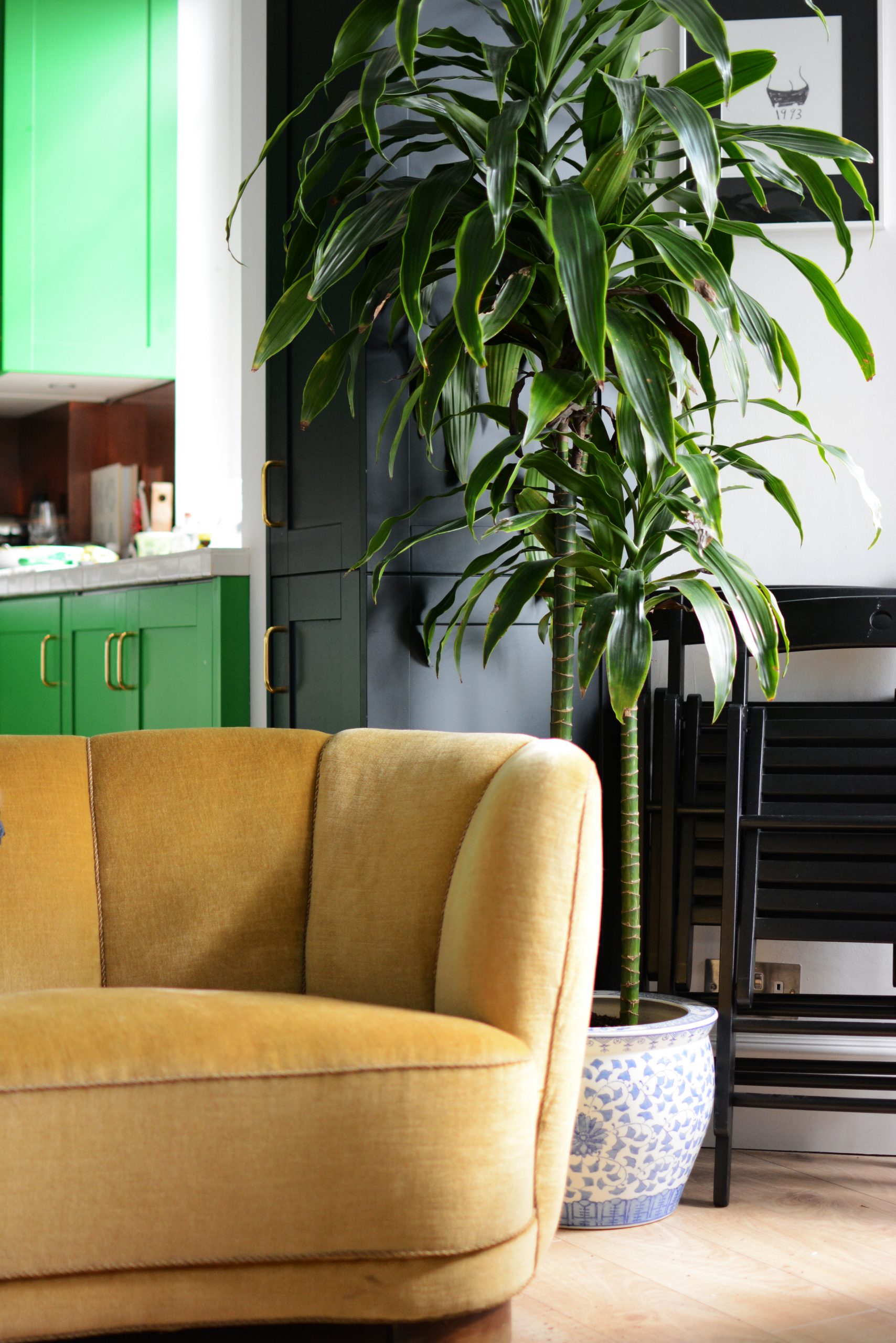 How would you describe your interiors style?

Actually, I worked in Interior Design before launching YOLKE for several years and was lucky to work with a few designers who had varying styles and tastes. I’m hugely influenced by places I travel to but in general I’m a sucker for mid century furniture and a healthy dosing of marble (preferably pink).  I don’t like too much clutter but love colour and if I could only buy one thing it would be a deep, comfortable sofa. When my boyfriend moved in the only thing we added to the flat was a second sofa…they are essential to happy living!

The flat is a bit tight on space so it’s not quite as cohesive as I’d like but definitely serves as inspiration to keep the nose to the grindstone and upscale.  I bought two amazing rattan armchairs with Chinoiserie frames on a whim last weekend because they were under priced and beautiful.  I have absolutely nowhere to put them, and they could really do with a huge veranda to sit on. But, I find it hard to resist buying furniture like that when I see it. There were a couple of other pieces I left behind which I’m still thinking about a week later. I don’t get that attachment feeling with clothes! 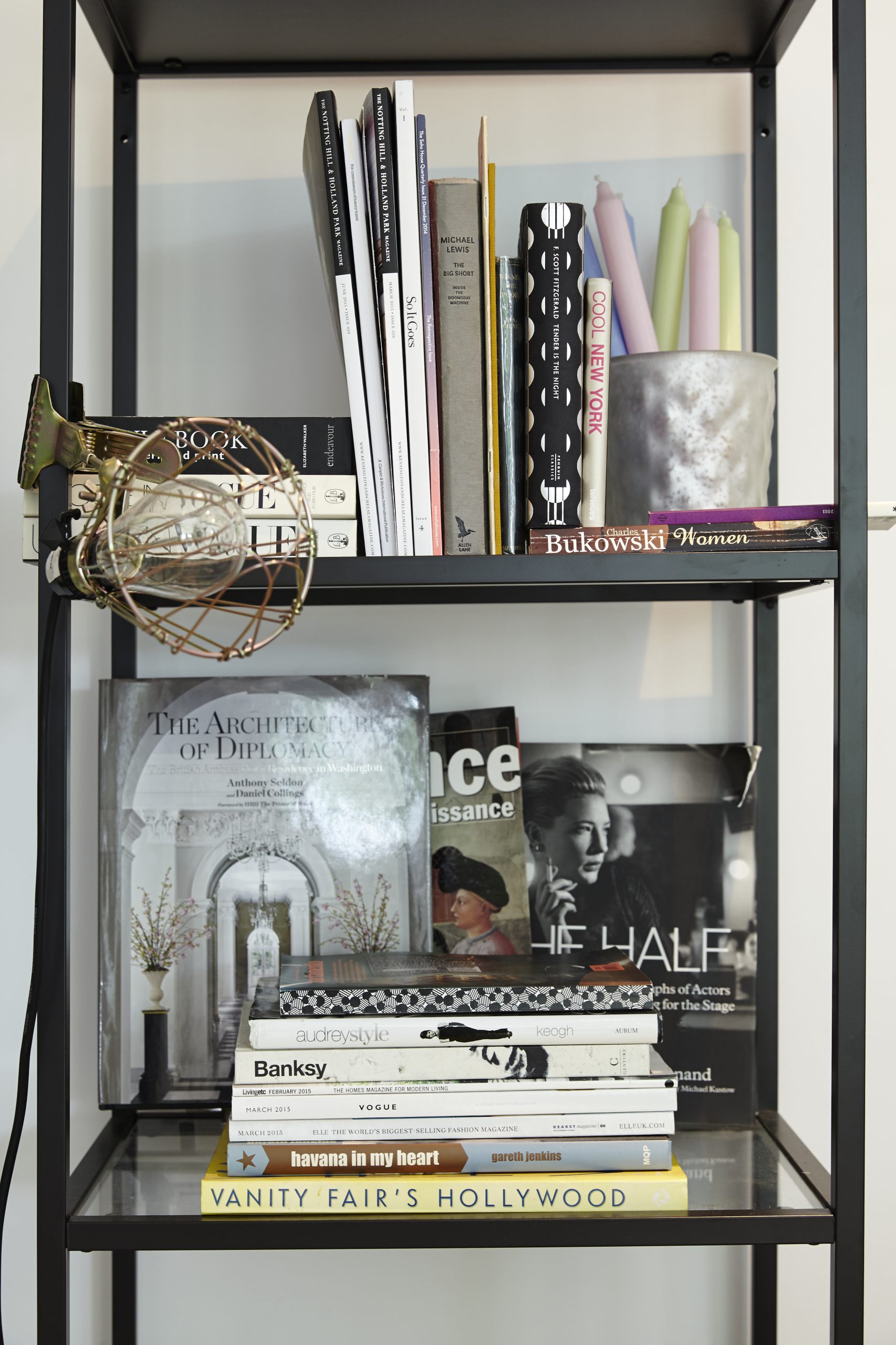 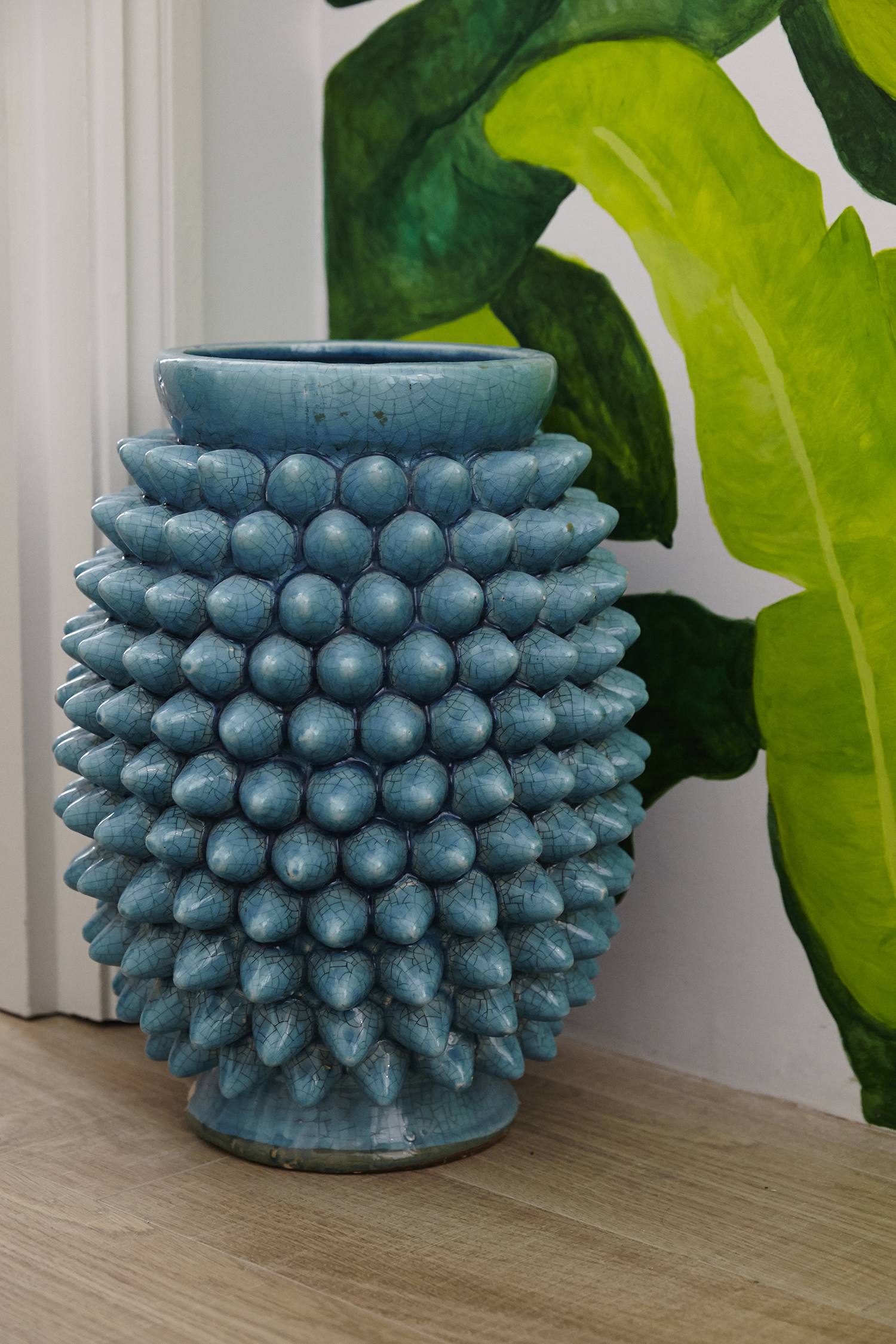 Did you do much to this flat when you moved in or was it just cosmetic?

It was a total gutting job so yes it started from scratch! The flat hadn’t been touched for a very long time and had a lot more walls so we ripped everything out. I took out the kitchen walls completely, making the layout of the kitchen/sitting rooms open plan. Then added in the crittall windows which was at the heart of the refurb.  I wanted the flat to feel as light and open as possible so through many discussions with the fire regs team worked out how we could design the crittall divider.  There is no window in the bathroom which I was really sad about but now from the bath, with the doors open,  I can see the trees which is very pleasing.  It’s not a huge flat so wasn’t too daunting and the changes were so worthwhile. 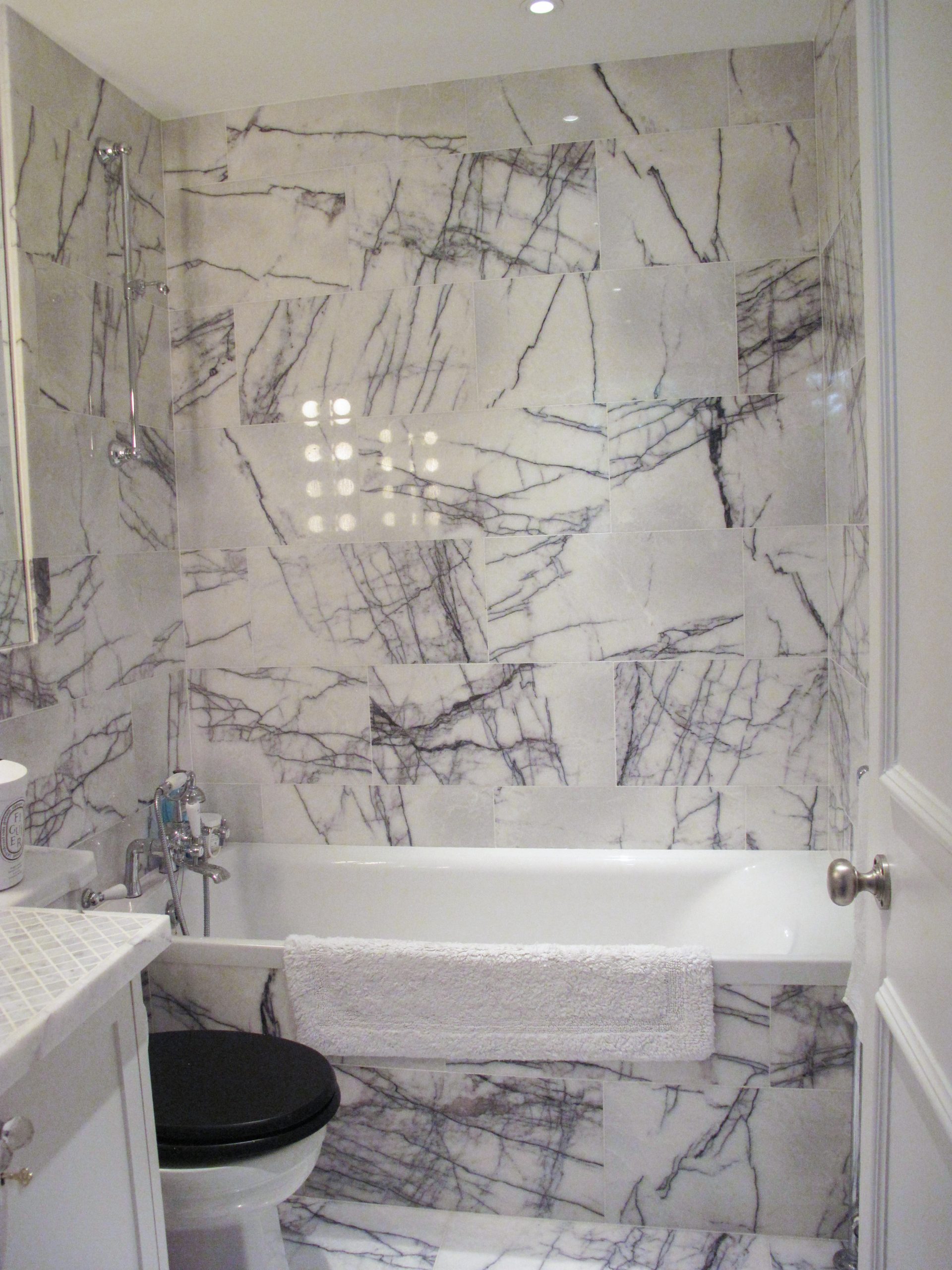 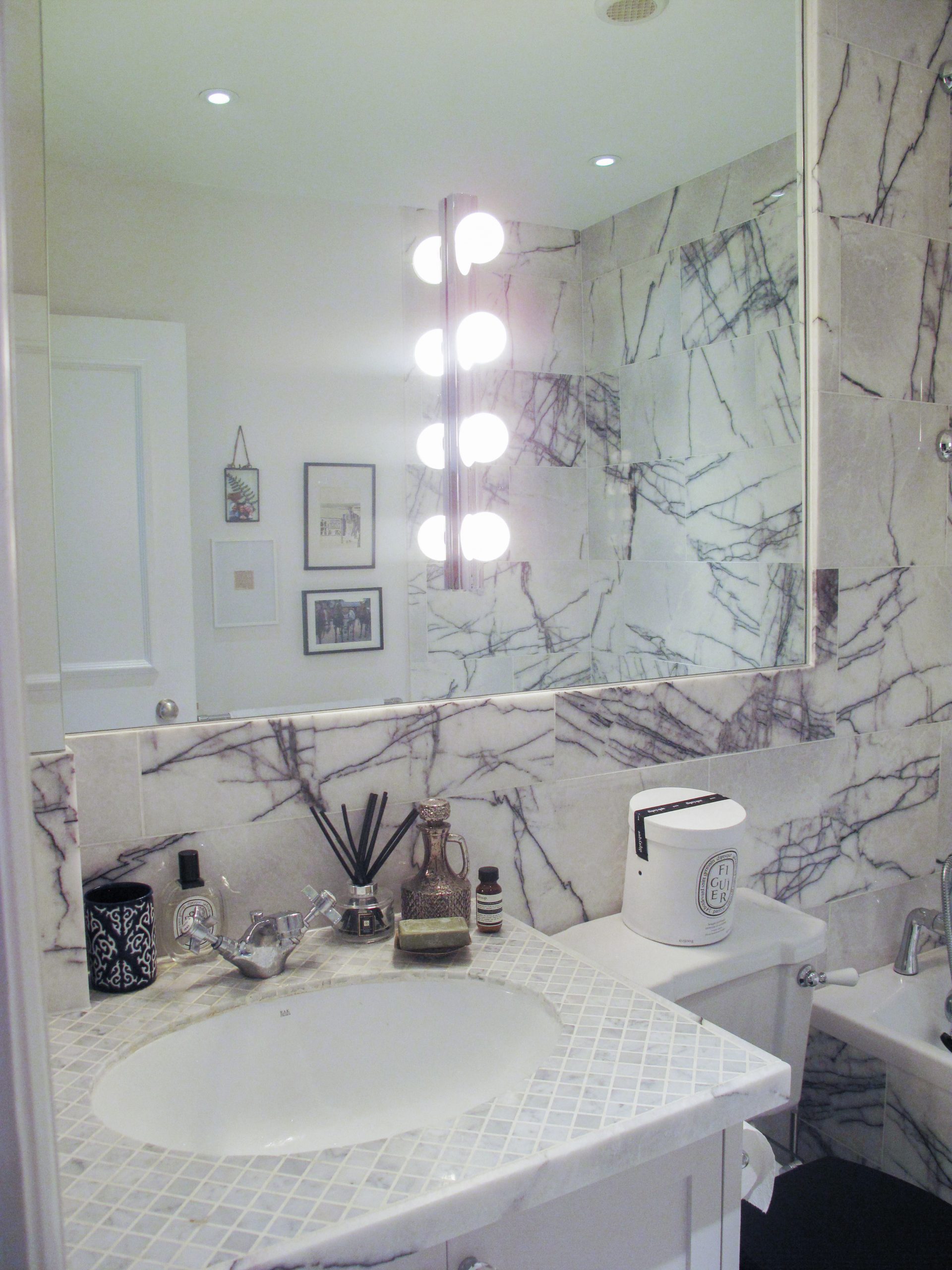 How long ago did you set up Yolke?

Four years ago now. We launched in the Spring of 2013 (although there were also about 9 months before that of planning and production).  Time has definitely flown by! 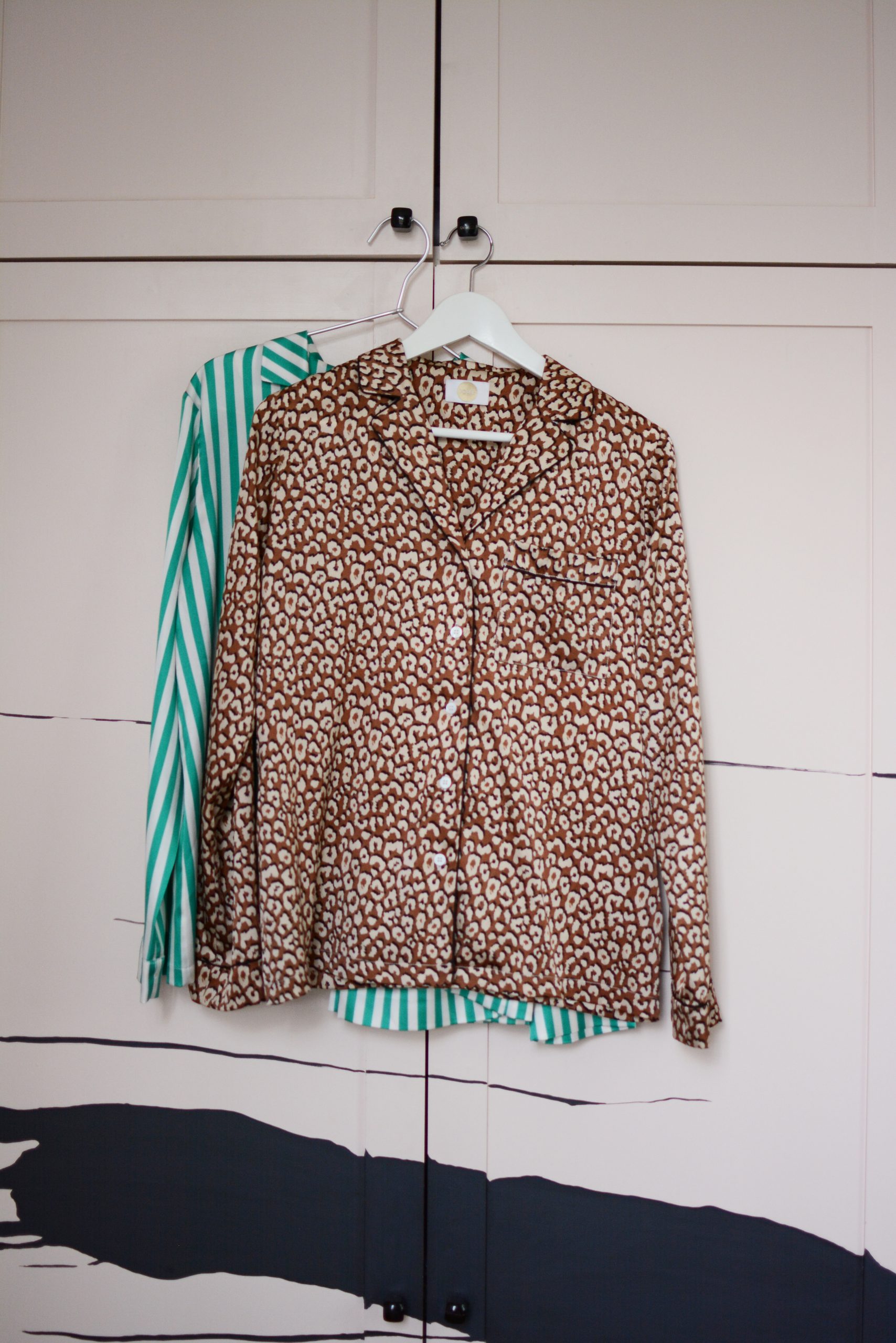 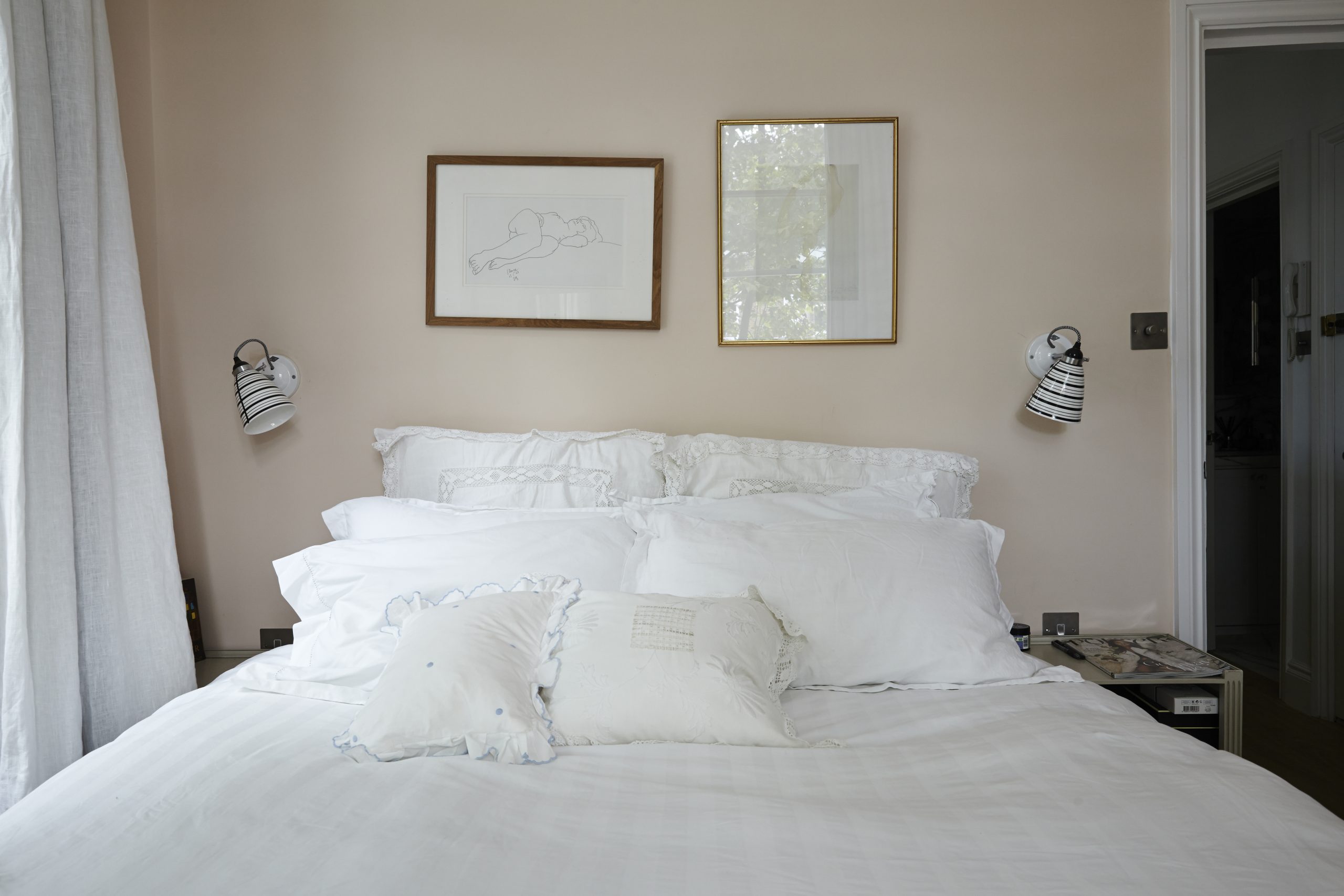 “The wall colour is ‘Pink Ground’ by Farrow and Ball.  I tried about ten different shades of nude pinks and like so often, F&B had the best version!” 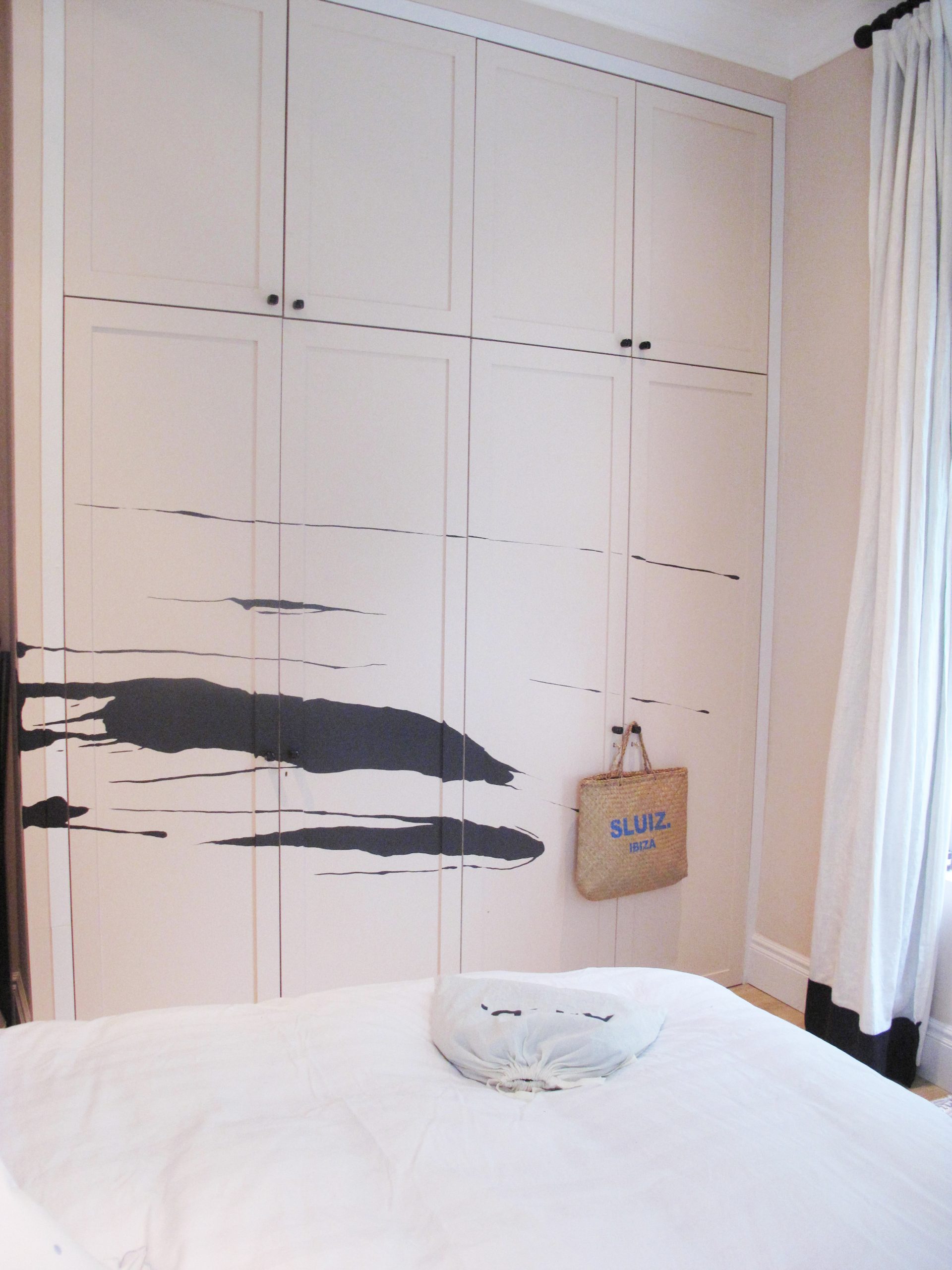 How did you do the wardrobes?

I was inspired by an image I’d seen of an entrance hall corridor that had these paint splashes down it.  When I researched it more the artist had actually made them using tape and slicing the paint splash shapes out.  With my painter we ended up just using a lot of reference images and then just going for it free hand one day.  Decorative painting can be a slightly under estimated tool for adding interest to large spaces such as wardrobes and walls that you might otherwise need to cover with wallpaper or pictures.

I wanted the very well known palm wallpaper from the Beverly Hills Hotel on the small section of wall in the entrance corridor. When I looked into how much it would cost to ship such a small amount from the US I decided just to paint a version of it on myself.  The process was so much more fun and the best part is as soon as I’m bored I can just paint over it with something else.  There is no need to feel precious about it! 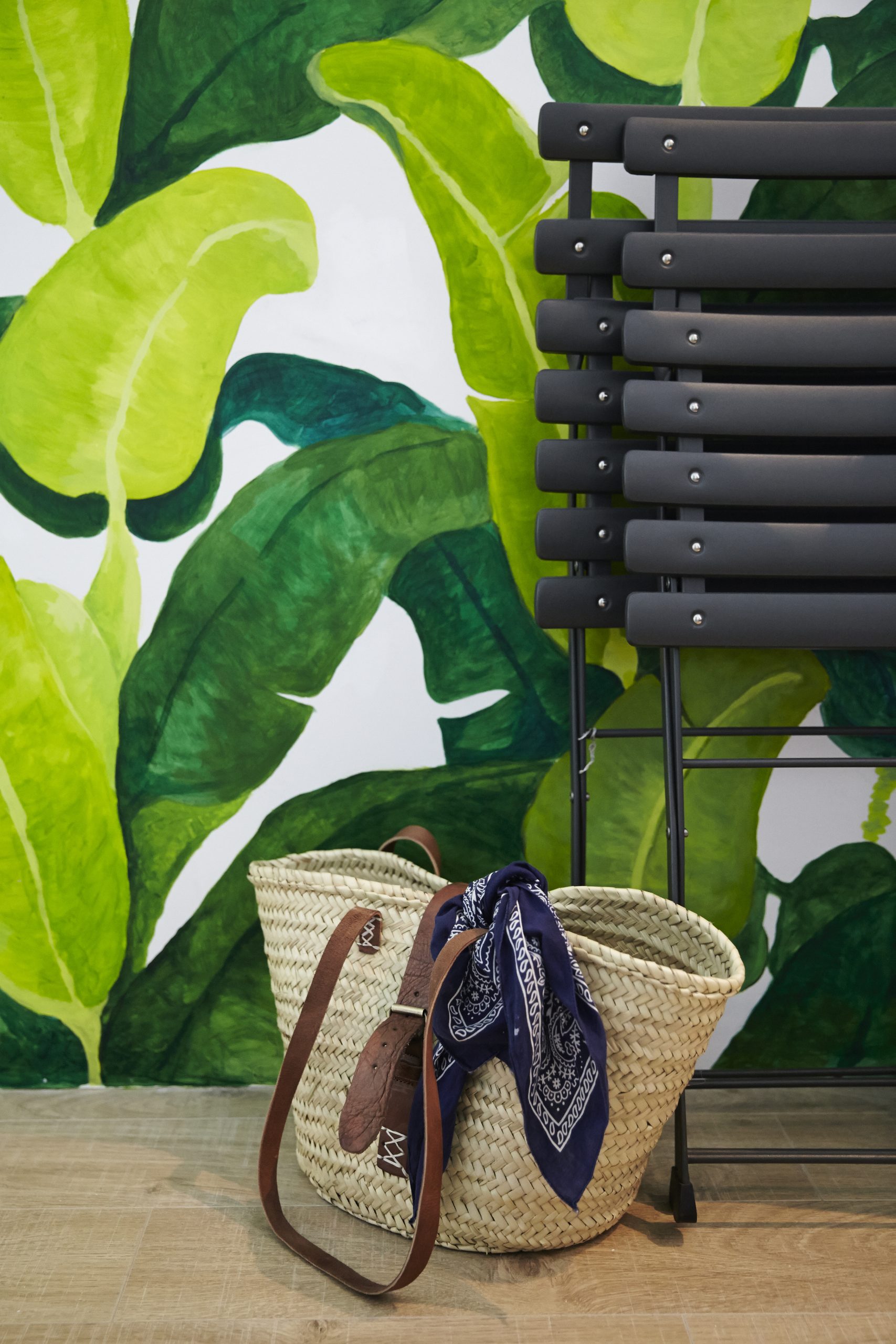 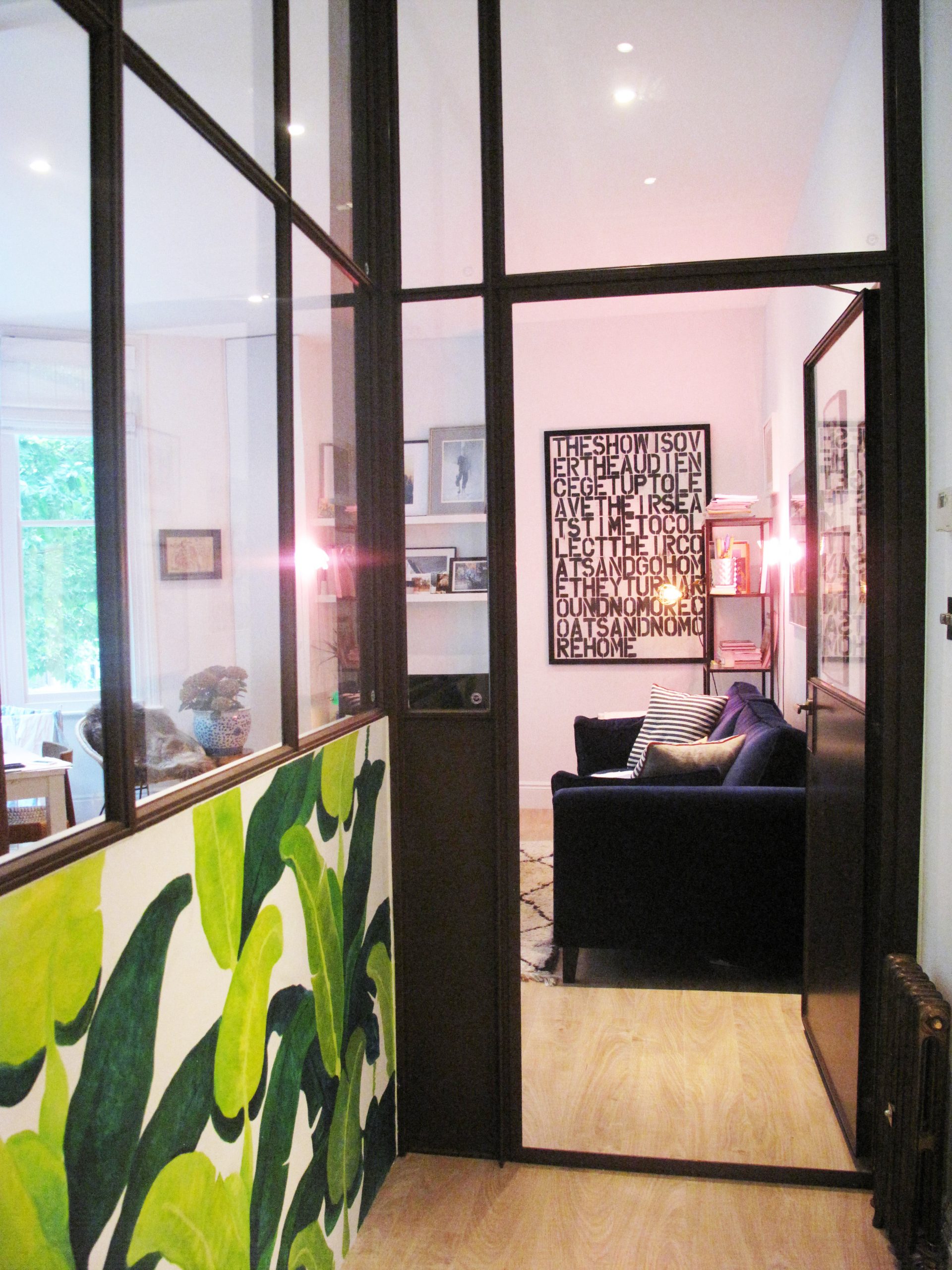 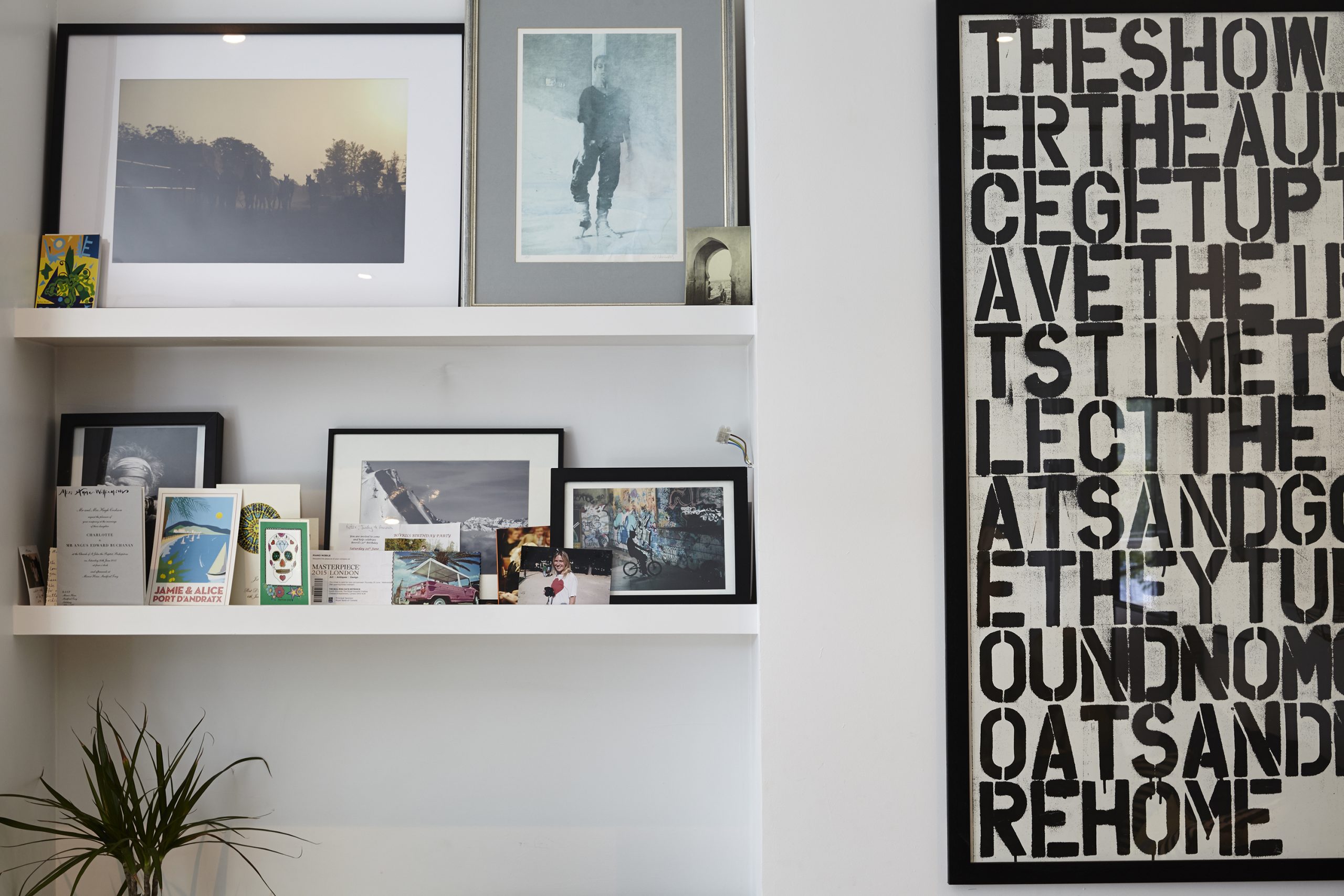 Where do you buy your art?

I’ve very fortunately been gifted a few things over the years. A god father was very prudent and used to give me little sketches and random things he liked as birthday presents when I was very young.  At the time I wasn’t too grateful but he clearly knew what he was doing as they’ve helped decorate many a flat over the years! I love photography and have prints from my sister’s travels – she lives in New Zealand and travels the world a lot, lucky thing.

Surfaceview.com is great for prints and Yellow Korner in Paris if you’re ever there has a really great selection. Antique shops can be great for paintings as well as furniture.  The great thing about art is it’s so subjective, one man’s junk is another man’s treasure and all that. I was given a really sweet painting of a French cafe scene as a moving in present that was bought that way. 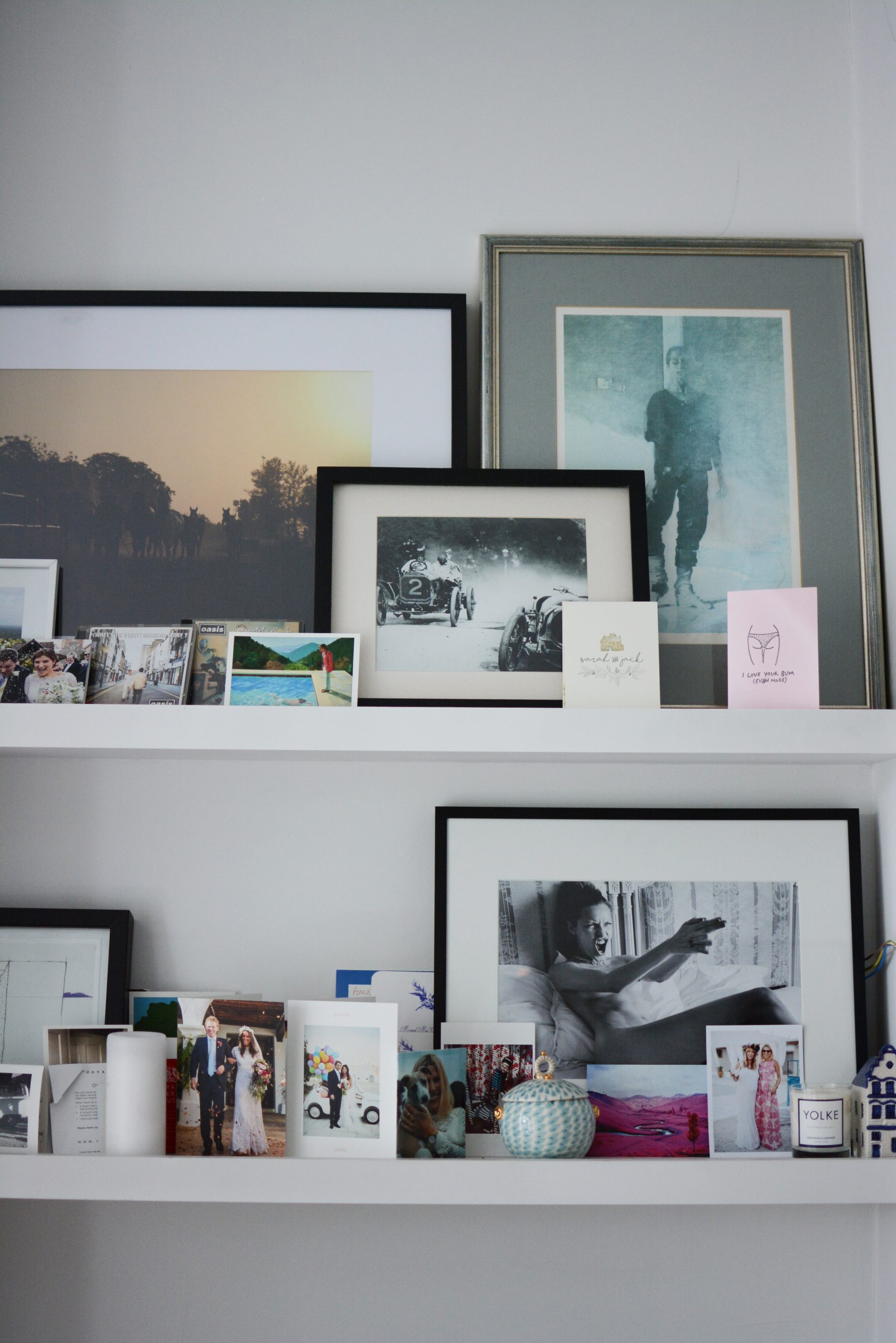 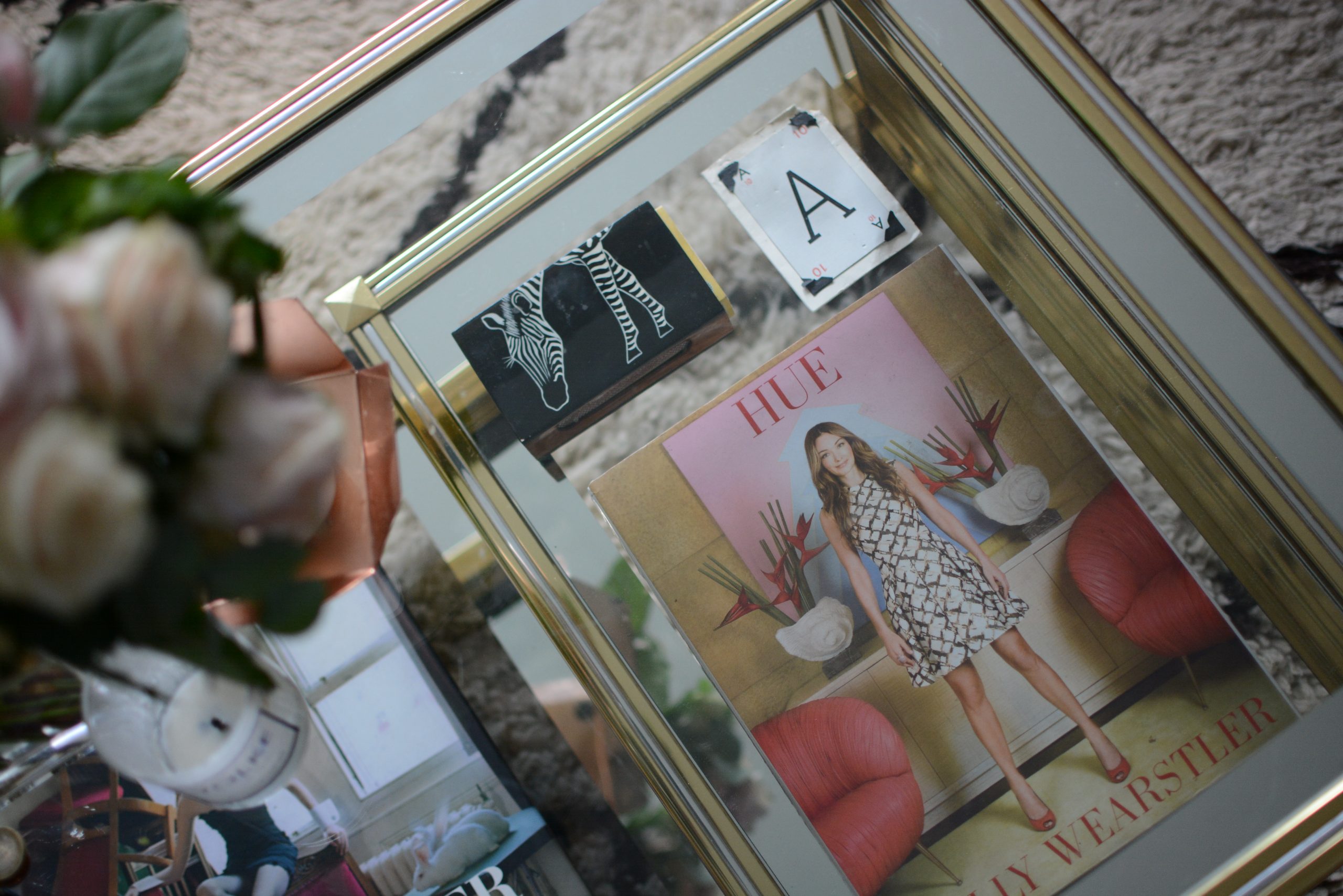 Which are your favourite interiors stores?

Antique shops and markets. Anywhere, but you get the best out of London in random little villages where you can find gems! Rose Uniake for inspiration, she has the most impeccable taste. Conran shop, eBay – it takes dedication but it’s definitely worth it. Chloe Alberry has a lovely store for any kind of door/cupboard knob you could ever need. Soane for dreaming! 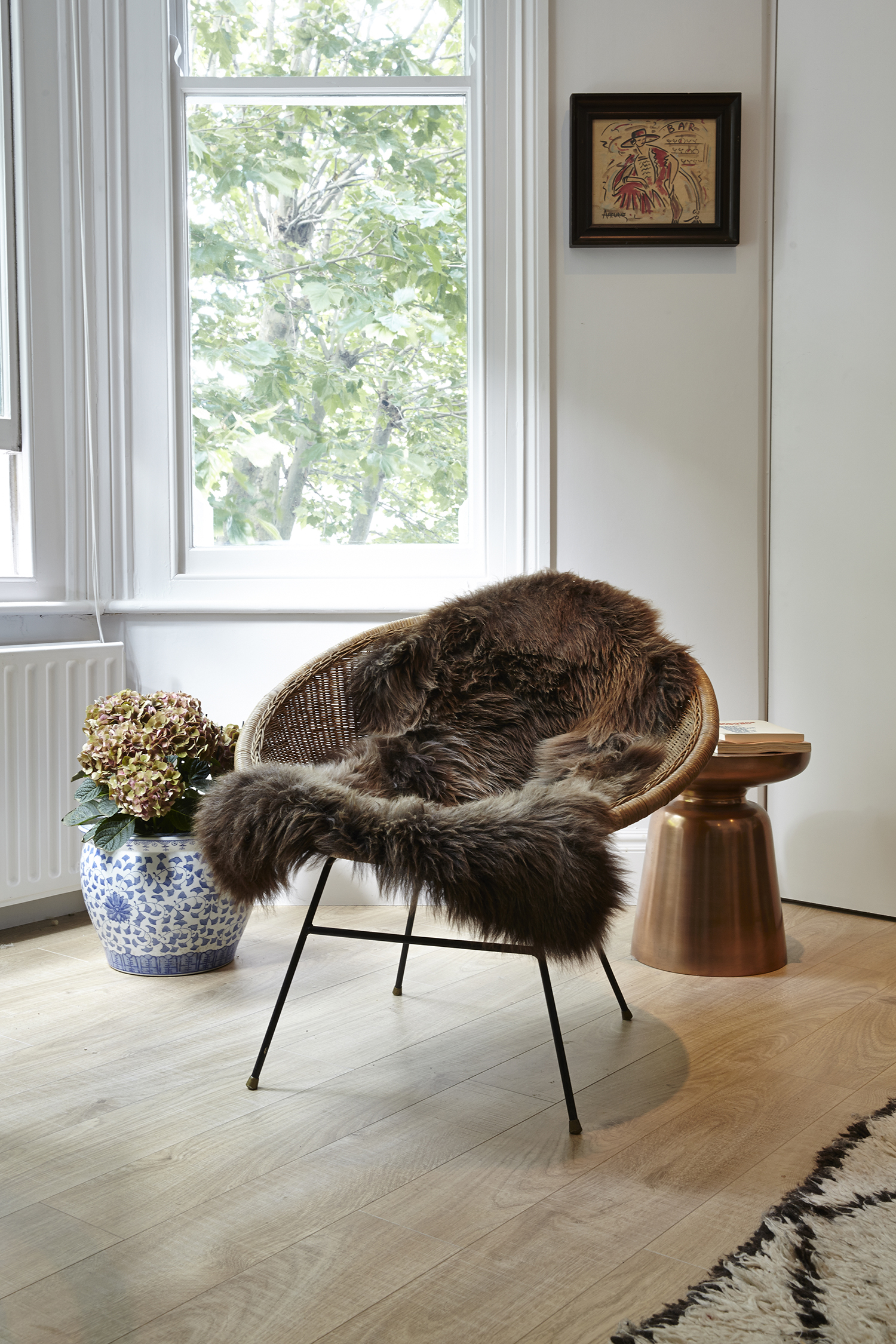 Thank you so much Anna for letting us into your gorgeous home. Looking forward to seeing how it evolves!

« What I packed for Rome (for reals)
Frugal City Guide: Rome »