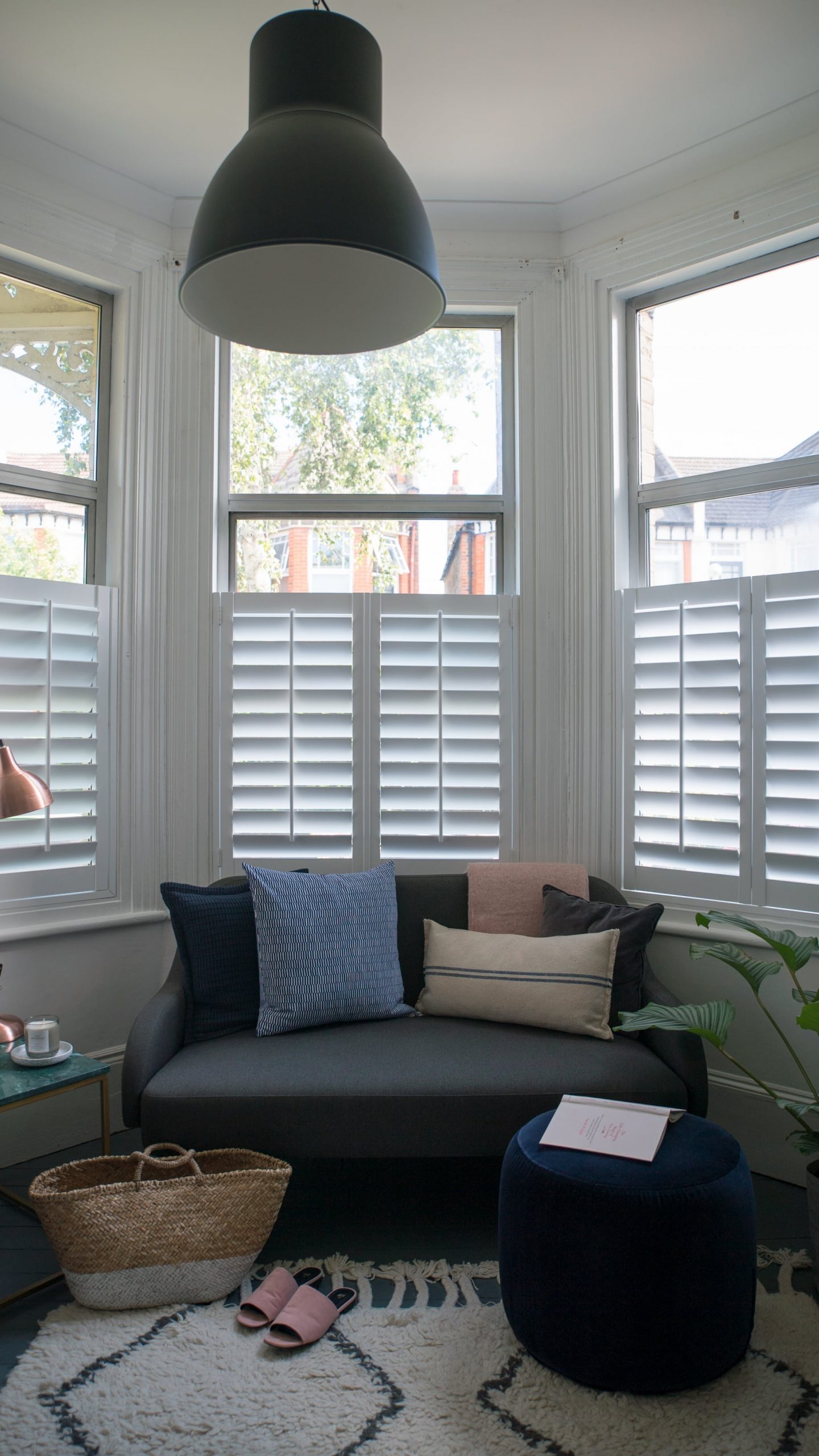 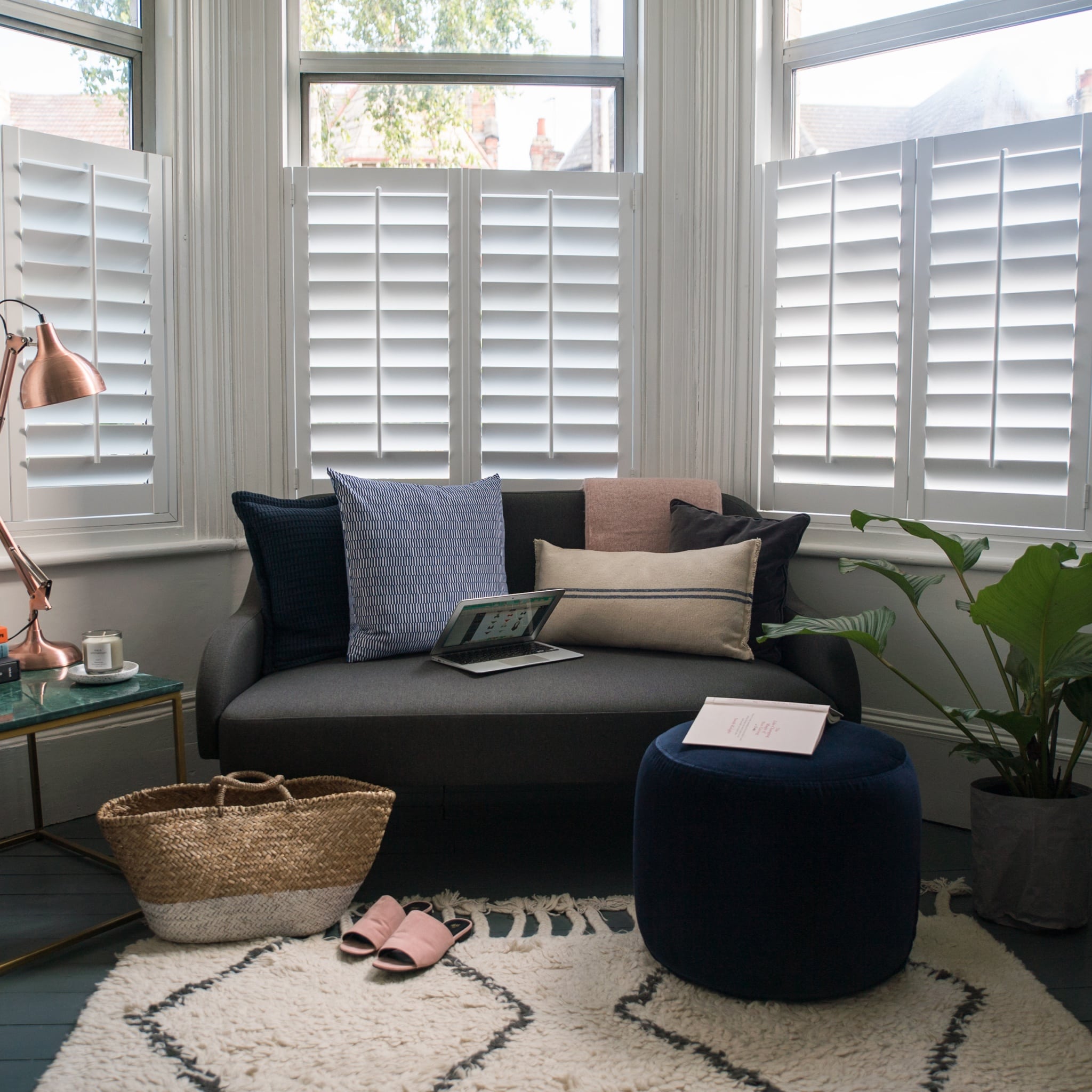 A few weekends ago, my parents descended on North London, toolbox in tow and helped us sort loads of odds and ends in the house which we’d been meaning to sort for a few months…

To say that Chris and I are DIY challenged would be an understatement. I only know how to paint things, anything that doesn’t move, and it usually ends with spillage. My husband shows willing, but sadly no capability. He’s handy with a floor sander and that’s about it. But at least we TRY. 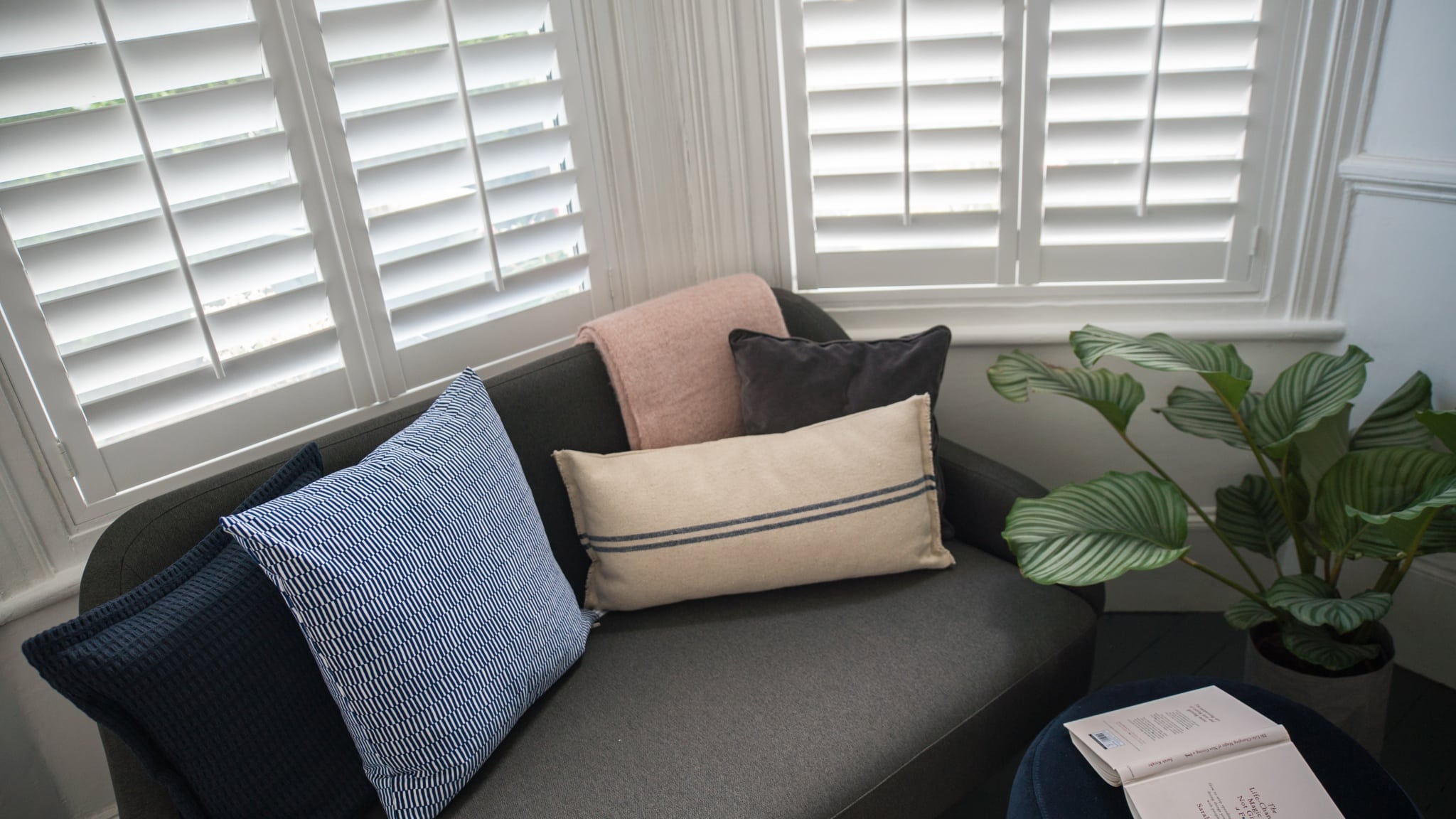 It is my father who is the hands on type, who comes from that generation that ‘got things done’. His father before him built their extension, did the rewiring in their house and thought nothing of it. So we did the usual thing of saving up every little thing that needed doing when they came round…

Shutters add a feeling of completion

We finally had the shutters delivered after waiting 3 months (via California Shutters), as recommended by my sister (see her gorgeous home here). They often do a 20% discount so it’s worth waiting, as they are rather pricey (as most shutters seem to be?!). We weren’t lucky enough to have original sash windows in this house and while we’re saving up to replace them, the shutters add a feeling of completion to this room (and at least hide the windows). 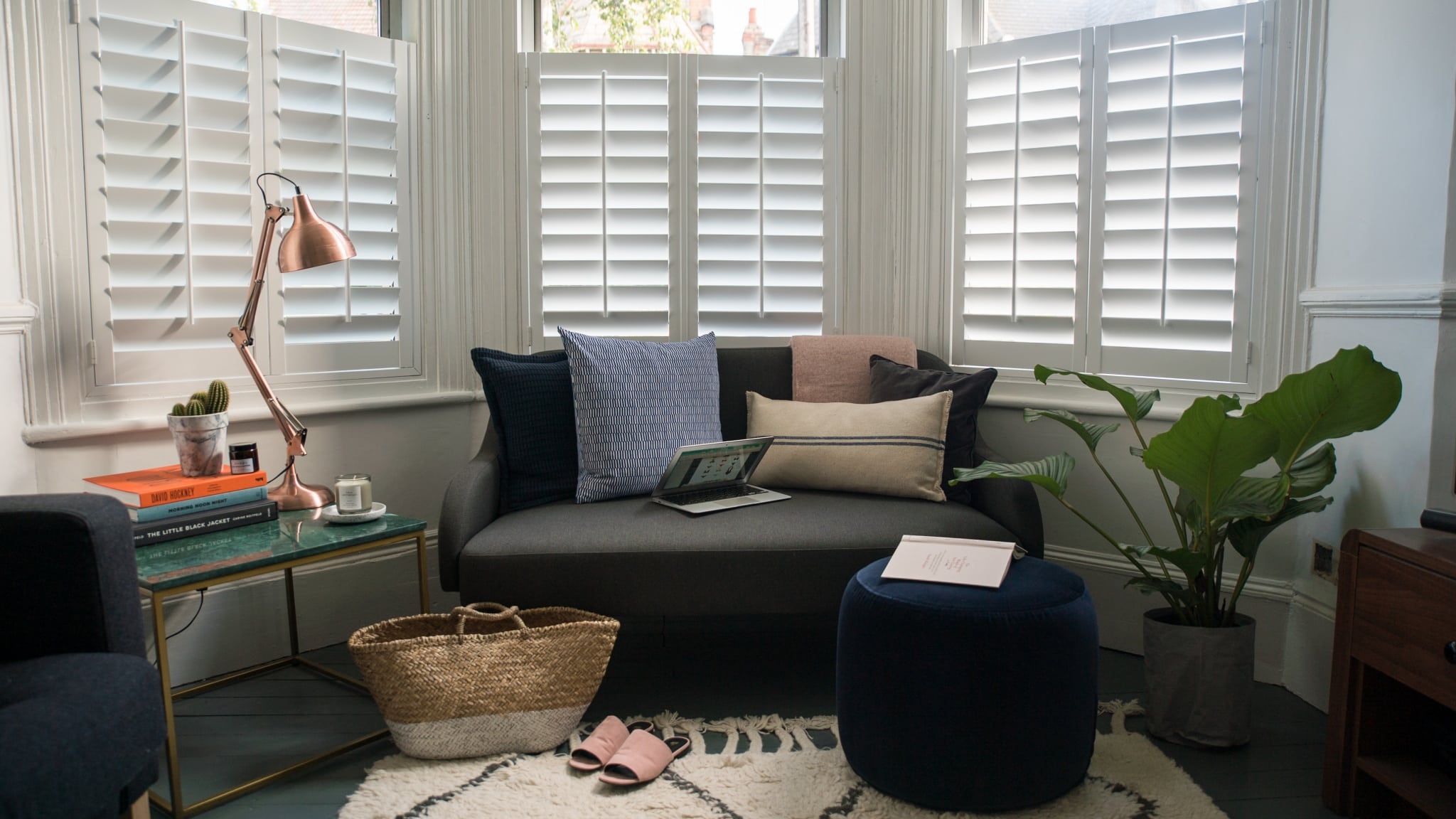 We had pine blinds here (which were here when we moved in) which we kept for a few months but they always let off an orangey glow into the room, and when we pulled them up in the day we were faced by passers-by looking us directly in the eye as we sat having our morning coffee in our dressing gowns! Or delivery men would think it appropriate to just knock on our window when they saw us in, rather than ringing the doorbell…

With a little help from my husband, the shutters took about 30 minutes to put up, got rid of about 7 boxes in our hallway and now the room feels airy and most of all, private. Money well spent. 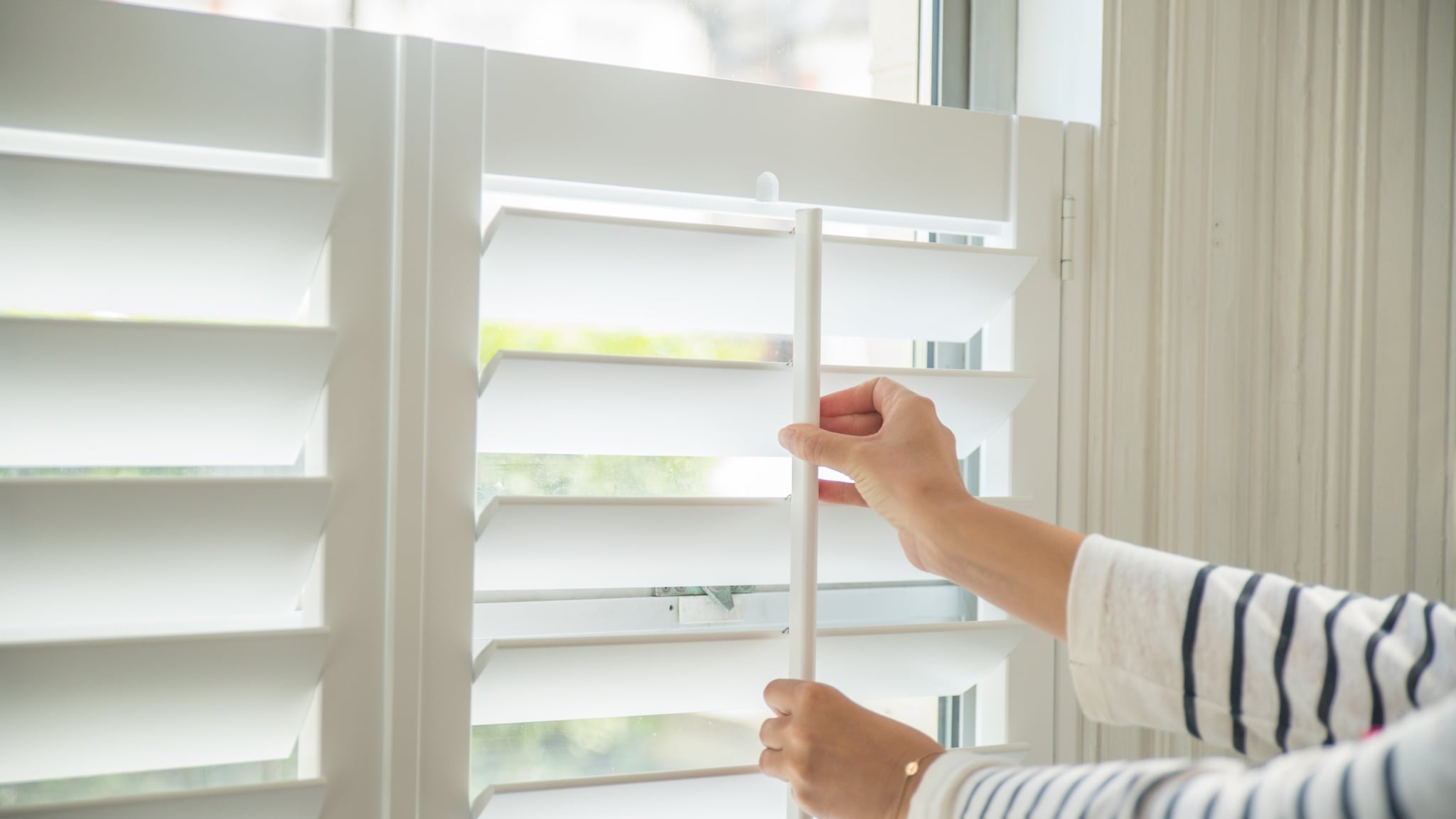 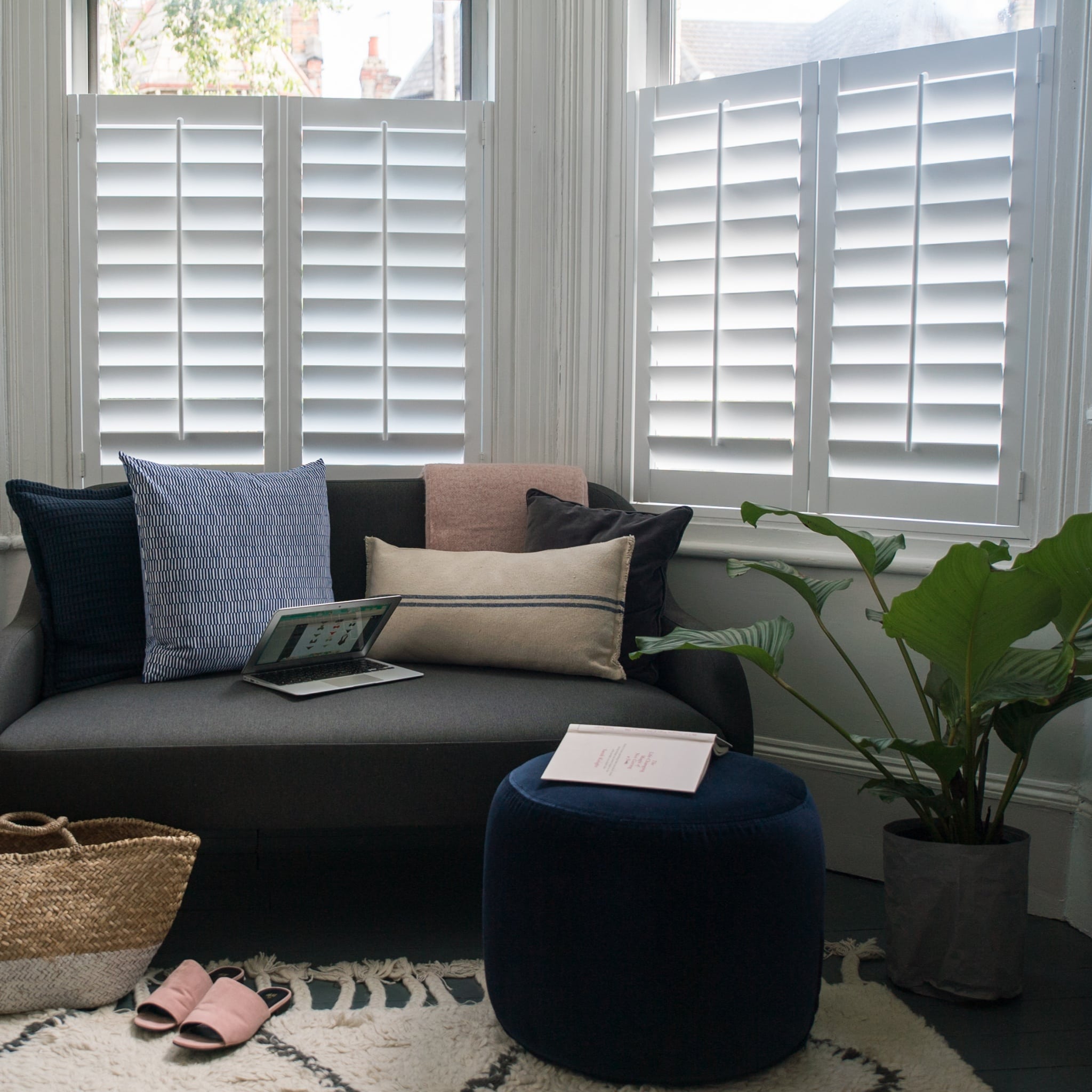 Then my amazing dad got moving onto the fireplace…we bought the tiles ages ago (Minton Hollins from Topps Tiles for the side and Fired Earth tiles for the front hearth) but the surface area was tricky… The side panels were at an angle the front hearth was raised with a lip at the front. And it was almost too small an area for a tiler to do… We got to work with some good old fashioned DIY. 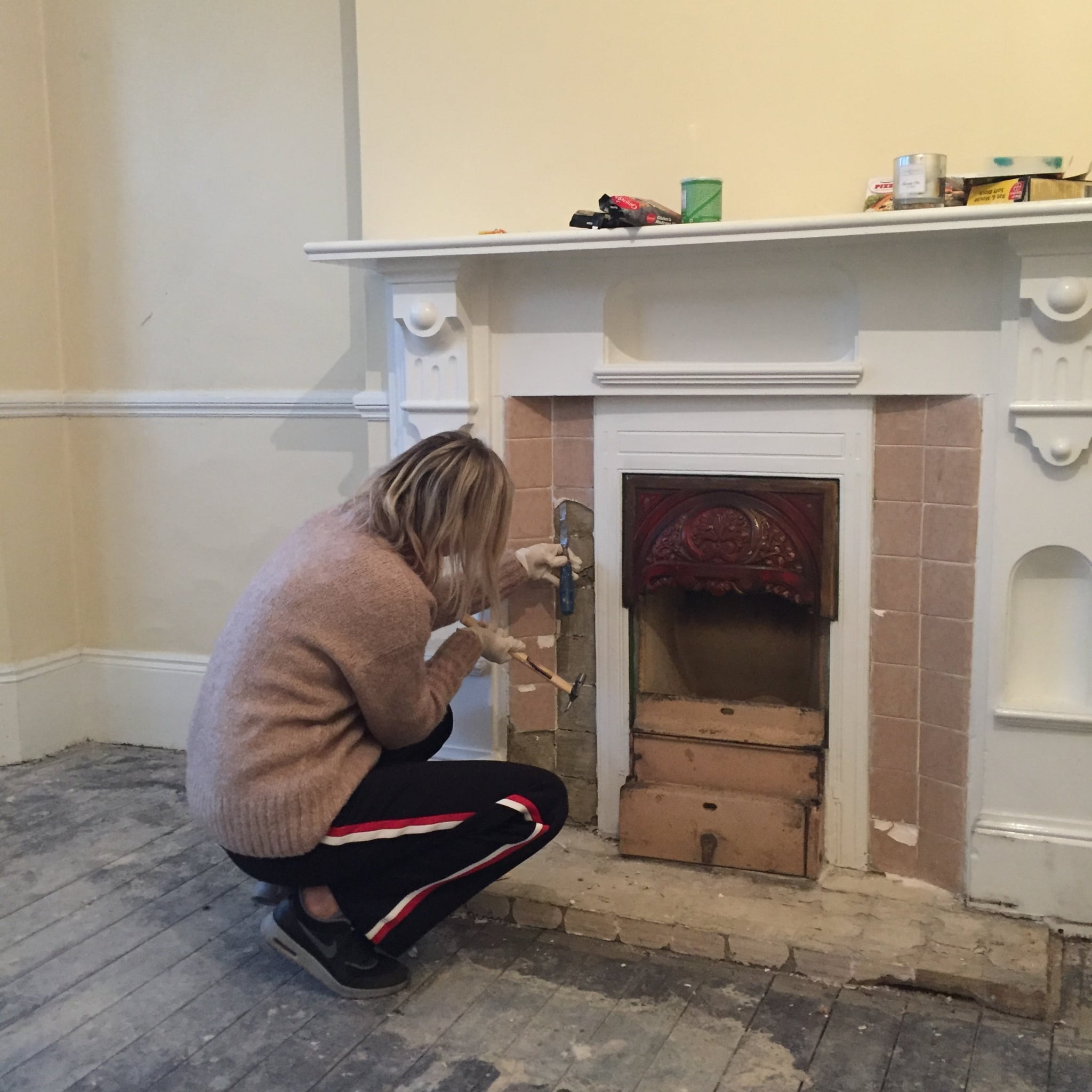 The fireplace when we first moved in

It took near enough a whole day but the tiles look better than we could have imagined. using grey grout, dad placed the tiles in a bit of a chevron style and used the grout as the corner of the front hearth (we thought it’d look too bathroom-y with a tile trim). 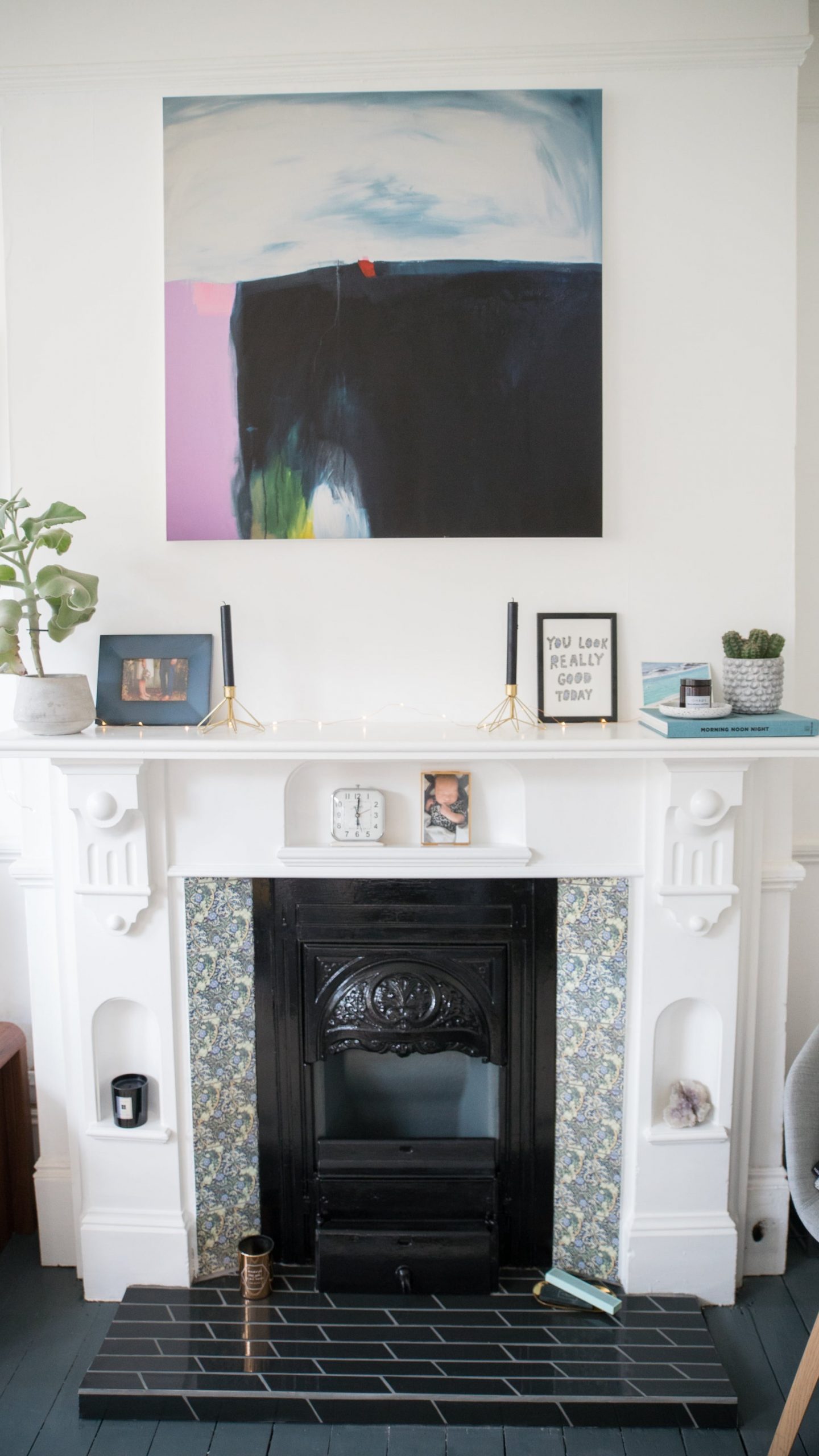 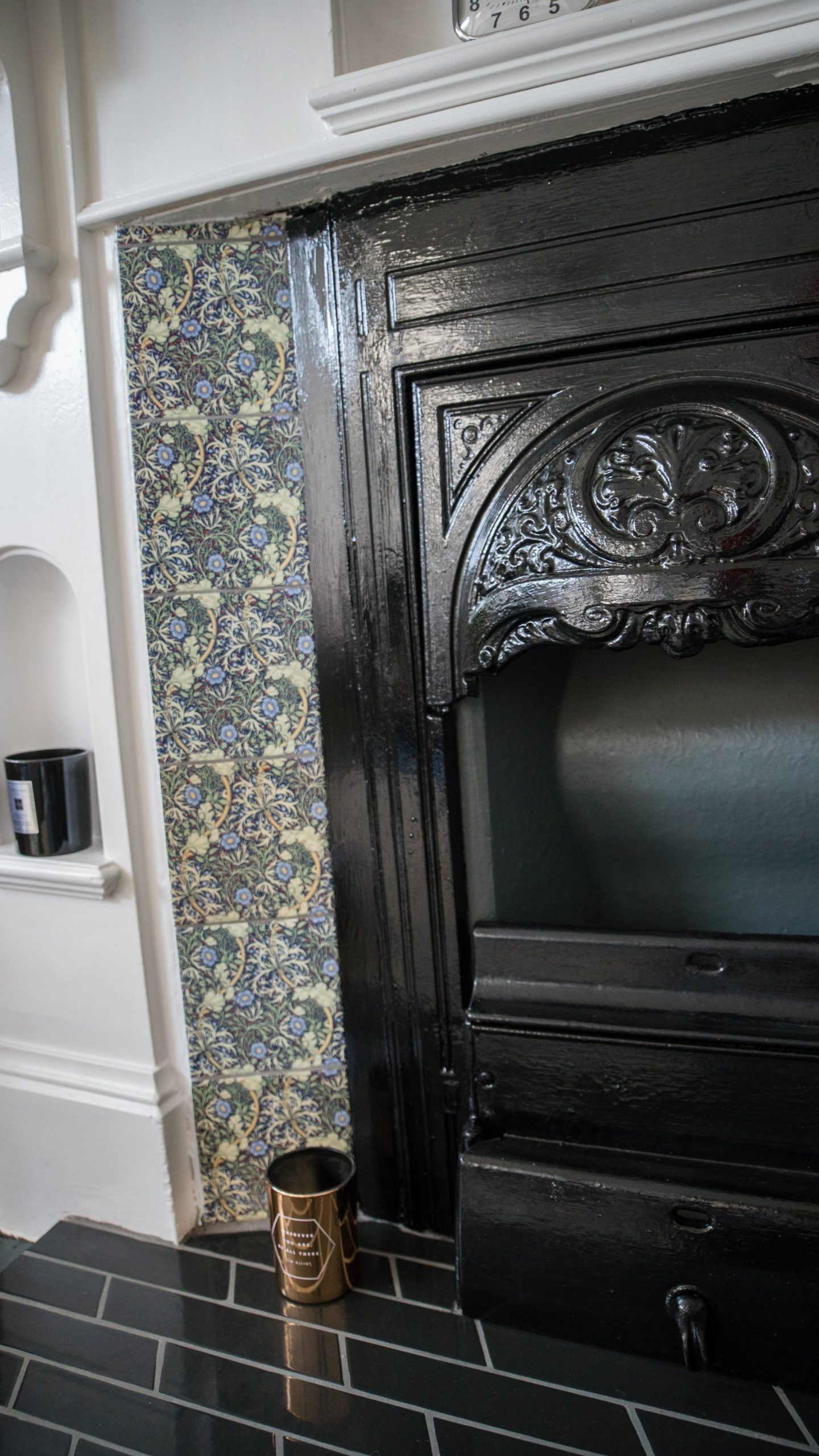 We wanted something that blended into the dark floor at the bottom, but knew we wanted something quite traditional for the sides. We fell in love with this pattern and love that it had a link to William Morris (whose studio was based where we used to live). They were too small for the side, so my dad found bits of MDF that he cut and filled in the gaps, and I painted black. You would never know it wasn’t part of the original fireplace.

I would never have thought you could just find bit of wood to fill in and fashion a hearth together – and love that you can make up the rules as you go. 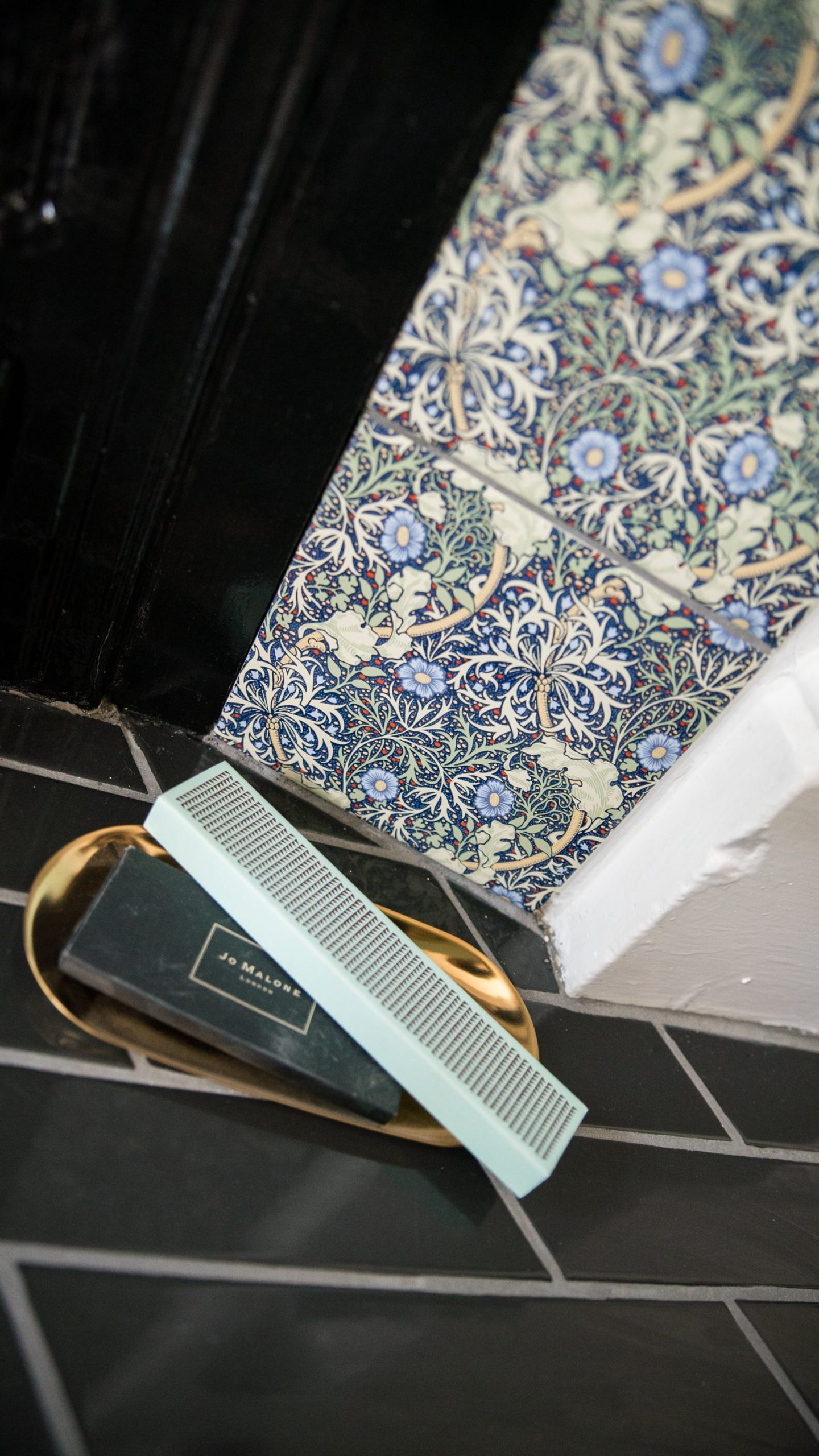 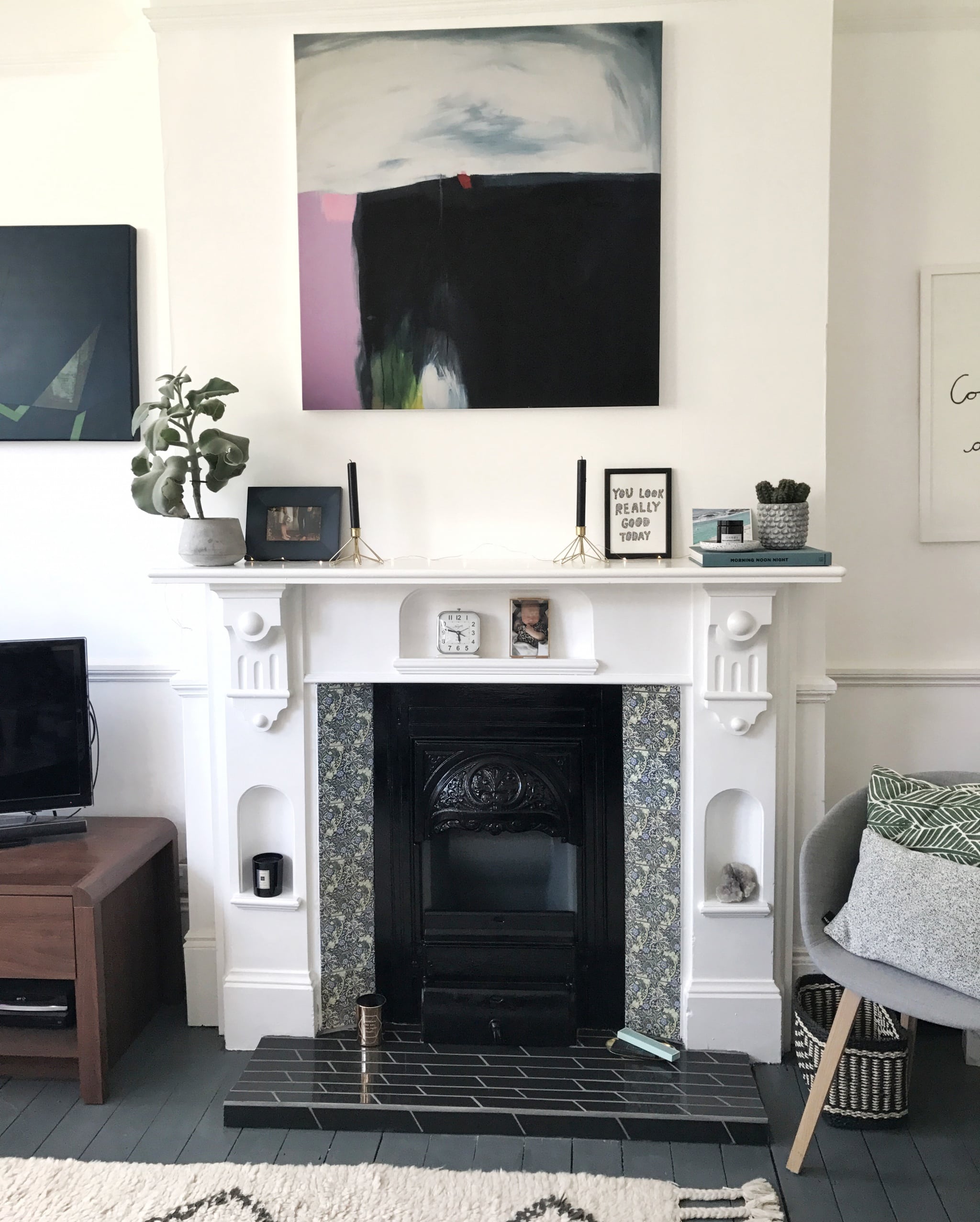 It’s funny, whilst this was all being done downstairs, my mum and I painted the spare room upstairs (more on that later) – and although we almost finished an entire room up there, it was the living room that felt more ‘wow’ from these small little jobs. Just shows that in a renovation project, every little job is worth doing.